This page should be merged with Seven Rings. 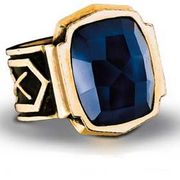 The Seven Dwarf-rings were the Rings of Power given to seven Dwarf Lords by Sauron in the guise of Annatar. The most famous was the Ring of Thrór, the Ring of Power given to Durin III king of Durin's folk. The Dwarf Lords proved resistant to the malevolent magic of the rings, which could not even turn them invisible. The rings did, however, make them exceedingly rich, but greedy as well.

Angered by his failure, Sauron tried to gather the rings back to him. He succeed in finding two, while four others were swallowed or destroyed by Dragons. The third ring Sauron obtained was taken from Thráin II in TA 2845 while he was imprisoned by Sauron in the dungeons of Dol Guldur. Gandalf arrived too late and only got the key and the map to the secret entrance of the Lonely Mountain from Thráin.

Retrieved from "http://tolkiengateway.net/wiki/Seven_Dwarf-rings"
Categories: Articles to be merged | Rings and Jewels