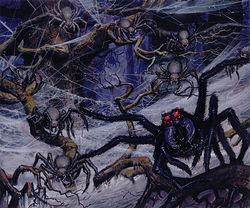 The Spiders of Mirkwood by Ted Nasmith.

These small eight-legged creatures, known for capturing their prey in intricate webs, were evidently as common in Middle-earth as they are today. Characters in The Lord of the Rings often refer to them descriptively, whether it be Gandalf discussing his capture by Saruman, Sam climbing ropes across the Silverlode, or Gollum clambering down a rock wall.

There was a more sinister side to the spiders of Middle-earth, though, that entered it with the monstrous Ungoliant in the years before the First Age. A gigantic creature of spider-shape, it was she who destroyed the Two Trees of Valinor, and escaped with Melkor into the lands of Middle-earth. Though Ungoliant herself disappeared into the far south, she left the northern lands infested with her offspring. During the First Age, the mountains of the Ered Gorgoroth were infested with these monsters, and became a place of dread.

The most famous of Ungoliant's children, though, lived far to the south and east of the Ered Gorgoroth, on the borders of the land of Mordor. This was Shelob, who haunted a network of tunnels watching the pass of Cirith Ungol, eking a living on the hapless Orcs of Sauron. She had offspring of her own, too, smaller than she but with a cruel intelligence, that spread throughout the Ephel Dúath and north into Mirkwood. It was creatures like these that Bilbo encountered in The Hobbit, and through fighting them that his sword acquired its name Sting.

"...when Ronald [Tolkien] was beginning to walk, he stumbled on a tarantula. It bit him, and he ran in terror across the garden until the nurse snatched him up and sucked out the poison. When he grew up he could remember a hot day and running in fear through long, dead grass, but the memory of the tarantula itself faded, and he said that the incident left him with no especial dislike of spiders."
― J.R.R. Tolkien: A Biography

"I knew that the way [for Frodo, Sam, and Gollum] was guarded by a Spider. And if that has anything to do with my being stung by a tarantula when a small child, people are welcome to the notion (supposing the improbable, that any one is interested). I can only say that I remember nothing about it, should not know it if I had not been told; and I do not dislike spiders panicularly, and have no urge to kill them. I usually rescue those whom I find in the bath!"
― Letter 163

"I put in the spiders largely because this was, you remember, primarily written for my children (at least I had them in mind), and one of my sons [Michael] in particular dislikes spiders with a great intensity. I did it to thoroughly frighten him and it did!"
― From an interview of J.R.R. Tolkien on January 15, 1957 by Ruth Harshaw for the "Carnival of Books" radio show. (According to The Annotated Hobbit)

"Throughout his life, Tolkien’s son Michael had what he called “a deep-rooted abhorrence of spiders.”"
― The Annotated Hobbit