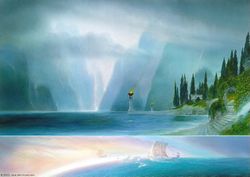 "The Grey Havens" by John Howe

Some mortals were allowed to take the Straight Road to Aman. Bilbo Baggins and Frodo Baggins sailed into the West on the White Ship.[3] Later Samwise Gamgee and Gimli were also permitted to depart for Aman.[4] Long after the Fourth Age, Ælfwine of England found the Straight Road and visited Tol Eressëa.[5]