Main article: Pipe-weed
"The Men of Gondor call it sweet galenas, and esteem it only for the fragrance of its flowers."
― Concerning Pipe-weed, The Lord of the Rings 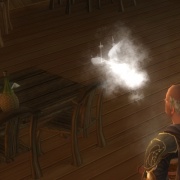