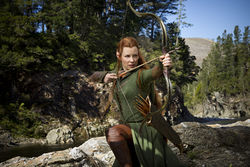 Tauriel in The Hobbit (film series)

Tauriel was a Silvan Elf of Mirkwood. She has been described as a warrior and head of the Wood-elf guard.[1] Her character was invented by Peter Jackson for The Hobbit (film series) and was portrayed by Evangeline Lilly.[2]

In The Hobbit: The Desolation of Smaug, when the Woodland Realm captures Thorin and Company, Tauriel takes a bit of an interest in the young Kíli. When she learns of his being struck by a poisoned arrow by Bolg in the Company's escape from custody in wine barrels, she goes after him in hopes of healing his wound. Legolas(who fancies her) joins her in pursuit of the Orcs who were after the company. The two of them manage to reach them in Lake-town and kill many of them, while Tauriel also manages to heal Kíli with Athelas found on the premises.