On September 18th, 2006 The Children of Húrin was announced. Set to be released on April 17th of 2007, the unfinished work edited by Christopher Tolkien will finally be released after 30 years of development. It will include 25 new black and white illustrations by Alan Lee.

J.R.R. TOLKIEN'S THE CHILDREN OF HÚRIN TO BE PUBLISHED IN 2007

Houghton Mifflin has acquired US rights to publish the first complete book by J.R.R. Tolkien since the posthumous Silmarillion in 1977. HarperCollins UK acquired the project from The Tolkien Estate in a world rights deal. Presented for the first time as a fully continuous and standalone story, the epic tale of The Children of Húrin will reunite fans of The Hobbit and The Lord of the Rings with Elves and Men, dragons and Dwarves, and the rich landscape and characters unique to Tolkien.

The Children of Húrin, begun in 1918, was one of three "Great Tales" J.R.R. Tolkien worked on throughout his life, though he never realized his ambition to see it published. Though familiar to many fans from extracts and references within other Tolkien books, it has long been assumed that the story would forever remain an "unfinished tale". Now reconstructed by Christopher Tolkien, painstakingly editing together the complete work from his father's many drafts, this book is the culmination of a tireless thirty-year endeavor by him to bring J.R.R. Tolkien's vast body of unpublished work to a wide audience.

Christopher Tolkien said: "It has seemed to me for a long time that there was a good case for presenting my father's long version of the legend of the Children of Húrin as an independent work, between its own covers, with a minimum of editorial presence, and above all in continuous narrative without gaps or interruptions, if this could be done without distortion or invention, despite the unfinished state in which he left some parts of it."

Having drawn the distinctive maps for the original The Lord of the Rings more than 50 years ago, Christopher has also created a detailed new map for this book. In addition, it will include a jacket and color paintings by Alan Lee, illustrator of The Hobbit and The Lord of the Rings Centenary Edition and Oscar ® -winning designer of the film trilogy.

The Lord of the Rings was already acclaimed worldwide as the most popular book of the 20th Century before the blockbuster films in 2001-3 broke new ground and inspired millions more to read J.R.R. Tolkien's books -- an additional 50 million copies were sold, leaving new fans wanting more. The Children of Húrin will be published by HarperCollins UK in April 2007, and on the same day in the United States by Houghton Mifflin. 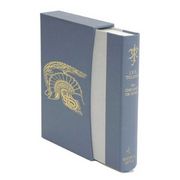 Victoria Barnsley, CEO and Publisher of HarperCollins Publishers UK said: "This epic story of adventure, tragedy, fellowship and heroism stands as one of the finest expressions of J.R.R. Tolkien's skills as a storyteller. With a narrative as dramatic and powerful as anything contained within The Lord of the Rings , it can now be read and enjoyed as Tolkien originally intended, and will doubtless be a revelation for millions of fans around the world.'"

Janet Silver, Vice President and Publisher of Houghton Mifflin, said, "As J.R.R. Tolkien's original American publisher, dating back to The Hobbit, we are extremely proud to be bringing this project to Tolkien's devoted readership in the United States. Christopher Tolkien has done a great service in realizing his father's vision for The Children of Húrin."

HarperCollins.ca Newsletter: The Children of Húrin

Painstakingly restored from Tolkien’s manuscripts and presented for the first time as a fully continuous and standalone story, the epic tale of The Children of Hùrin will reunite fans of The Hobbit and The Lord of the Rings with Elves and Men, dragons and Dwarves, eagles and Orcs, and the rich landscape and characters unique to Tolkien.

Tùrin is born into a Middle-earth crushed by the recent victory of the Dark Lord, Morgoth, and his monstrous army. The greatest warriors among Elves and Men have perished and Tùrin’s father, Hùrin, has been captured. For his defiance, Hùrin’s entire family is cursed by Morgoth to be brought down into darkness and despair.

But, like his father, Tùrin refuses to be cowed by Morgoth and as he grows so does the legend of the deadly hero. In a land overrun with marauding Orcs, Tùrin gathers to him a band of outlaws and gradually they begin to turn the tide in the war for supremacy of Middle-earth.

Then Morgoth unleashes his greatest weapon: Glaurung, Mightiest of Dragons, and he proves an unstoppable foe. As the Dragon carves a fiery swathe through Middle-earth there remains only one man who can slay him, but to do that he will first have to confront his destiny.

The Children of Hùrin was one of three Great Tales begun by J.R.R. Tolkien as he recovered from the horrors of the First World War, and he worked on refining and improving it for the rest of his life. This tragic tale of adventure, heroism, suffering and love stands as one of the finest expressions of his skills as a storyteller and the narrative is as powerful as anything contained within The Lord of the Rings. Painstakingly reconstructed by Christopher Tolkien from his father’s manuscripts, it can finally be enjoyed as the author originally intended.

From a preliminary copy