The History of Middle-earth 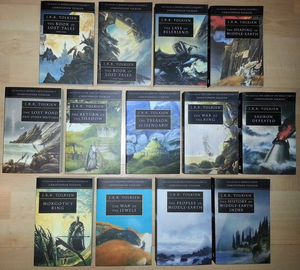 HarperCollins paperback edition of The History of Middle-earth

The History of Middle-earth is a 12 volume series of books compiled and edited by J.R.R. Tolkien's son, Christopher Tolkien. In the volumes, Christopher Tolkien presents and discusses manuscripts by his father related to the stories of The Silmarillion and The Lord of the Rings. Some of the material is revealed for the first time, while some consists of earlier versions of already published material.

The first two books introduce us to The Book of Lost Tales, the first conception of Tolkien's legendarium. The third volume deals with long poems concerning some of the main stories. The following two books follow developments from The Book of Lost Tales to the first so called Quenta Silmarillion. Volumes 6 through 9 discuss the development of The Lord of the Rings, while the second half of book 9 discusses the tale of Númenor. Books 10 and 11 discuss the later developments of The Silmarillion, which served as source material for the published edition. The final book entails the development of The Lord of the Rings Appendices, followed by some assorted essays J.R.R. Tolkien wrote in the last years of his life.

A thirteenth volume was published in 2002, The History of Middle-earth Index. This book has completely integrated all the indices from the set in one large index.