"Oh, great King under the Mountain!"

"Balin, it's only Thorin"
― Balin and Bilbo, Rankin/Bass' The Hobbit

Thorin II Oakenshield (Third Age 2746 – 2941, lived 195 years) was King of Durin's folk for 91 years, from 2850 to 2941. He was the son of Thráin II and the older brother of Frerin and Dís. Thorin led his house during their exile from Erebor, and later helped reclaim their kingdom and briefly became King under the Mountain. This adventure, the "The Quest of Erebor", was the basis for The Hobbit.

Born at the Lonely Mountain at the height of its glory, Thorin was just 24 years old when his people were driven into exile by the dragon Smaug. He fled with his father Thráin II and his grandfather King Thrór, but his grandfather was devastated by the loss and left his people, wandering south with a single companion, Nár. Thráin meanwhile led the exiles to Dunland, where they eeked out a meager living. 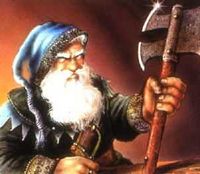 Twenty years later, Nár returned with horrible news. He and Thrór had journeyed to Moria where the King of Durin's folk had been captured and butchered by the Orc-chietain Azog. To add insult to injury, Azog had carved his name on Thrór's severed head in runes, releasing Nár only so that all Dwarves would know that an Orc now ruled Moria.

Filled with righteous anger, Thráin gathered togethered a massive army of Dwarves and began the War of the Dwarves and Orcs. One by one the Dwarves destroyed the Orc warrens in the Misty Mountains until the reached the East-gate of Moria. At the Dimrill Dale the Dwarves fought the bloody Battle of Azanulbizar. Thorin was 53 years old, young for a Dwarf, but he fought admirably. At one point his shield was broken and he was forced to use an oak branch to defend himself, earning him the epithet "Oakenshield". The Dwarves were ultimately victorous and Azog was slain, but they took horrible losses, included Thorin's brother Frerin. They were also unable to take back Moria, as Dáin Ironfoot had peered beyond the East-gate and saw that Durin's Bane still haunted the mines.

After the war, Thráin and Thorin led their people east to live in the Blue Mountains. In 2841 Thráin left with a small group to see if they could retake Lonely Mountain. While some of the companions returned, Thráin was never seen again by his kin.

So Thorin became king and seemed content to stay in Eriador. There he labored long, and trafficked, and gained such wealth as he could; and his people were increased by many of the wandering Folk of Durin who heard of his realm in the west and came to him.

The years lengthened. The embers in the heart of Thorin grew hot again, as he brooded over the wrongs of his House and the vengeance upon the Dragon that he had inherited. He thought of weapons, armies, and alliances, as his great hammer rang in his forge; but the armies were dispersed, the alliances broken and the axes of his people few. A great anger without hope burned him as he smote the red iron on the anvil.

But at last years later, by a chance Thorin met Gandalf the Grey in the town of Bree. In 2850 Gandalf had gone on a secret mission to the dark fortress of Dol Guldur and in the dungeons he had found a Dwarf so diminished he no longer knew his own name. The Dwarf had given Gandalf his last two possessions, a map and key to Lonely Mountain. Suddenly realizing he had found Thráin, Thorin's father and the missing King of Durin's folk, the Wizard convinced Thorin that now was the time to defeat Smaug and retake his kingdom. He also convinced him that he would need a burglar for the job.

Thorin gathered a group of twelve Dwarves, including his sister-sons Fíli and Kíli. Thorin and Company, as they called themselves, hired Bilbo Baggins as their "professional treasure seeker". Thorin was at first extremely reluctant, unsure whether the Hobbit could offer anything to the group, but ultimately relented to Gandalf's advice. While at Bilbo's home, Gandalf gave Thorin his father's map and key. 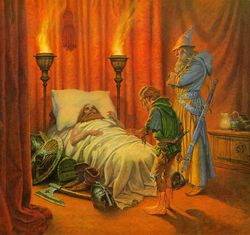 The Death of Thorin Oakenshield by Darrell Sweet

Bilbo proved to a key member of the company, saving the Dwarves many times, often despite Thorin's suspicious and overbearing nature. Eventually the company reached Lonely Mountain, and the Dragon Smaug was overcome by the brave townspeople of Lake-town. Here Thorin's greed overcame him and he refused to share his wealth with the Men of Lake-townany, and with their ally, Thranduil. He was furious when Bilbo stole the fabled Arkenstone, the Heart of the Mountain, in an attempt to make a truce with the beseiging Men and Elves. Thorin sent for his cousin Dáin Ironfoot, and he came with five hundred Dwarves from the Iron Hills.

All disputes were set aside when Goblins and Wargs from the Misty Mountains suddenly attacked. The Dwarves and their allies were victorious in the Battle of Five Armies, but Thorin was mortally wounded.

After being borne to safety by Beorn, Thorin made his peace with Bilbo by commending the hobbit's bravery and good character. Thorin died of his wounds shortly after, and was laid to rest under the Mountain. The sword Orcrist, which he had obtained earlier in the Quest, was buried with him, as was the Arkenstone. It was said that the blade glowed when enemies were near, so the Dwarves of Erebor were never taken by surprise by any enemy.

Since Thorin did not have any children, the kingship of Durin's folk went to his cousin Dáin II Ironfoot, who left the Iron Hills to become King under the Mountain.

In all his screen adaptations, Thorin is depicted as having a forked grey beard. Little is changed about his role, since he already is the most prominent of the thirteen dwarves.

Retrieved from "http://tolkiengateway.net/wiki/Thorin"
Categories: Dwarves | Longbeards | Characters in The Hobbit