Thorin II (Third Age 2746 - 2941), also known as Thorin Oakenshield, was the King of Durin's Folk from T.A. 2850 until his death in T.A. 2941, being the son of Thráin II, grandson of Thrór and older brother to Frerin and Dís. Thorin led Durin's Folk of the Blue Mountains during their time in exile. In T.A. 2941 he led the quest for Erebor accompanied by twelve dwarves, Bilbo Baggins, and Gandalf the Grey; he briefly became King under the Mountain until he perished following the Battle of Five Armies.[6]

Thorin wore a sky-blue hood with a long silver tassel. Around his neck he wore a golden chain, upon which he attached his grandfather's key.[4]

It was Thorin, but you could only have told it by his golden chain, and by the colour of his now dirty and tattered sky-blue hood with its tarnished silver tassel.
—J.R.R. Tolkien[7] 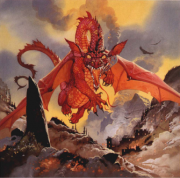 Thorin was born in T.A. 2746, presumably in the Lonely Mountain where his grandfather, Thrór, was King under the Mountain. Thorin was still a youngster (aged c. 24), by Dwarves' reckoning, when the dragon Smaug descended upon the mountain of Erebor in flames. Smaug left the mannish town of Dale in ruins and killed many dwarves who were inside the mountain. Thrór and Thráin (Thorin's father) escaped using a secret Back Door. Meanwhile Thorin was one of the few Dwarves who was not inside the mountain at the time. Thus the surviving Dwarves of Erebor were driven into exile and Thrór, Thráin, and Thorin fled south.[1][4]

Weary, elderly and disillusioned, Thrór departed from Dunland with Nár. They came to Azanulbizar and the Eastern gate of Moria, which they found was open. Whilst Nár stayed behind (and urged his companion to do the same) Thrór approached and entered the gate, and was murdered by Azog. He added insult to injury by branding Thrór's brow with the name 'AZOG' in Dwarfrunes. Thus it was that the War of the Dwarves and Orcs began following the return of Nár, who bore the news to Thráin.[1]

Battle of Azanulbizar by Mikel Janin

The war was fought long and hard between the two races, ultimately ending in a pyrrhic Dwarven victory at the Battle of Azanulbizar in T.A. 2799. Both Thráin and Thorin were wounded during this battle and Frerin (Thorin's brother) was killed. When his shield broke, in its stead he used an oak branch to block the blows of his foes.[8] Despite victory no Dwarf dared to re-enter Moria out of fear of Durin's Bane.[9]

In memory of this, Thorin swore to always bear a plain shield of oak with no device until he should be hailed king,[10] and thus he earned the epithet Oakenshield.

"We will get it back" by Charles Burggraf

Thráin, Thorin, and the other survivors of Durin's Folk left Azanulbizar and returned to Dunland. However they soon began to wander Eriador before settling at last in the Blue Mountains. Here they prospered in their own fashion, forging iron objects and increasing their numbers (albeit, due to a scarceness of Dwarf-women, very slowly, and by wandering Longbeards who heard of his dwelling). Nonetheless they all still longed to return to the Lonely Mountain.[1]

By this time Thráin was in possession of the last of the Seven Rings of power. It is possible that as Sauron's power grew so too did the ring's influence over Thráin. His burning desire for gold and to return to the Lonely Mountain became too great and in T.A. 2841 he set out to return. Thorin was never to see his father again for Sauron captured and imprisoned Thráin in Dol Guldur. Thus it was that in T.A. 2850, following Thráin's death, Thorin became the King of Durin's Folk at the age of ninety-five. Thorin and his people were content living in the Blue Mountains and Eriador but as the years waned Thorin's desire to return to Erebor grew.[11]

Listen to me, Thorin Oakenshield ! [...] If this hobbit goes with you, you will succeed. If not, you will fail. A foresight is on me, and I am warning you.
—Gandalf[12] 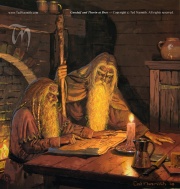 Gandalf and Thorin at Bree by Ted Nasmith

The fortunes of the House of Durin changed when Thorin met Gandalf by chance in T.A. 2941.[note 1] They then proceeded to go to Thorin's Halls. There they discussed their tales and Gandalf formulated a plan. Gandalf knew that Sauron could have potentially used Smaug with devastating effect. Therefore both he and Thorin had a shared interest in removing Smaug. Gandalf wanted Thorin and a company of dwarves to travel to the Lonely Mountain taking Bilbo Baggins with them. Gandalf's instinct was that the Quest for Erebor would only be successful if Bilbo accompanied them. 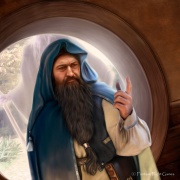 Thorin Oakenshield from The Lord of the Rings: The Card Game

Therefore Gandalf invited Thorin and other Dwarves to Hobbiton of the Shire, instructing them to look for a smial whose door was marked with the sign of the thief (as the dwarves had gotten it into their head that Bilbo was a thief). Thus Thorin found himself in Bag End, where they perused the hobbit's hospitality. However, Thorin and the dwarves were not convinced; it was not until Gandalf revealed Thrór's Map and key that Thorin was convinced that the quest would be profitable to him. Even after the "Unexpected Party" Gandalf only persuaded Thorin to take Bilbo on the morning that they set off.[13]

Thus it was that in T.A. 2941 Thorin set off for the Lonely Mountain with Gandalf, Bilbo Baggins, Fíli and Kíli, Balin, Dwalin, Dori, Nori, Ori, Óin, Glóin, Bifur, Bofur, and Bombur. A short time into the journey the adventurers found a Troll's cave. Here they found a hoard of treasure which included blades made in the ancient city of Gondolin. Bilbo found a knife that he named Sting, Gandalf acquired Glamdring and meanwhile Thorin found Orcrist.[14] Whilst Thorin and Company were in Rivendell Elrond read the inscriptions on the blades and informed them of their sword's histories. He also read the moon-letters on Thrór's map; it read "stand by the grey stone when the thrush knocks [...] and the setting sun with the last light of Durin's Day will shine upon the keyhole."[15]

The return of the King under the Mountain 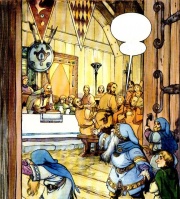 Upon reaching Esgaroth, the closest settlement to the Lonely Mountain, Thorin was greeted warmly and the men of Lake-town hailed the return of the King under the Mountain.[2] They soon reached the Lonely Mountain itself and "with the last light of Durin's Day" they found the secret side-door, using the key to open it.[16] Thorin sent Bilbo in to carry out his duty as their 'esteemed burglar'. This enraged Smaug who sought to destroy the burglar and take out his vengeance on the Lake-men.[17] The dragon was slain by Bard who pierced an un-armoured spot on the dragon's underside.[18]

Upon hearing the news of the death of Smaug, Thorin was overcome by greed. He fortified the main entrance to the mountain and refused to share any of the treasure. Hosts of Wood-elves and Lake-men approached the mountain led by the Elvenking and Bard respectively. Thorin refused to accept their claims to a share in the treasure and sent for his cousin, Dáin Ironfoot, who brought more than five-hundred Dwarves from the Iron Hills.[19] Bilbo sought to bring an end to the dispute; to this end he secretly gave the Arkenstone to Bard and the Elvenking to use in making a deal with Thorin. When Thorin heard about Bilbo's actions he was furious and felt betrayed by the Hobbit.[20] 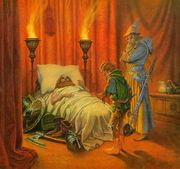 The Death of Thorin Oakenshield by Darrell Sweet
However all disputes were cast aside when the army of Bolg, Azog's son, suddenly attacked. Thus the three armies of Elves, Men, and Dwarves united against the two armies of Goblins and Wargs: the Battle of Five Armies had begun. As the battle drew on, Thorin leapt from the front gate and rallied all Elves, Men, and Dwarves to him. The armies of the free peoples of Middle-earth emerged triumphant. Nonetheless Kíli and Fíli were killed and Thorin was gravely wounded. Before he died Thorin spoke to Bilbo and commended his good character, courage and friendship. With that, he died. He was laid to rest deep within the Lonely Mountain. Dain Ironfoot, the new King under the Mountain, placed the Arkenstone upon Thorin's chest, whilst the Elvenking laid Orcrist upon Thorin's tomb.[21]

Thorin did not live to enjoy his triumph or his treasure. Pride and greed overcame him in spite of my warning
—Gandalf[12]

Thorin was a particularly stubborn, proud, and greedy dwarf. According to Gandalf Thorin was, from the beginning, contemptuous about the notion that Bilbo should go with him on his long-desired adventure to the Lonely Mountain; he thought that Gandalf was trying to mock him and make him look foolish. Indeed Thorin found it difficult to accept the advice of Gandalf at all, believing that he should have been drawing plans for war and battle rather than planning to use a Hobbit as a burglar. Thorin's most coveted prize was the Arkenstone, something which Bilbo believed was not only the heart of the mountain but at the heart of Thorin too. His greed was epitomised at the moment when it was revealed that Bilbo had given the Arkenstone to the Elvenking and Bard; he lifted Bilbo up shouting 'I will throw you to the rocks'. Upon his deathbed Thorin repented his ways, saying that "if more of us valued food and cheer and song above hoarded gold, it would be a merrier world."[22]

Thorin's name is one from the Dvergatal. It means "Bold".[23]

The epithet "Oakenshield" also comes from the Dvergatal. Eikinskjaldi means "Oakenshield", and it has long been considered the name of a Dwarf. However, because the name appears twice, both in Dúrinn's and Dválinn's line, it has also been suggested that it simply means "with an oaken shield".[24]

In early manuscripts of The Hobbit, the name Gandalf was used by Tolkien for the character who later would be named "Thorin Oakenshield" in the published works.[25]

Thorin Oakenshield is the commander of the garrison of Dale. He is not a royal.[26]

Thorin will be portrayed by Richard Armitage.[27] A description of Thorin in The Hobbit films was released by the studio:

As a young Dwarf Prince, Thorin witnessed the destruction and terror wrought when a great fire-breathing dragon attacked the Dwarf Kingdom of Erebor. When no one came to the aid of the surviving Dwarves, a once proud and noble race was forced into exile. Now, as the strong, fearless fighter and respected leader of The Company of Dwarves, Thorin is determined to reclaim his homeland and destroy the beast that brought such misery upon his people.
—Warner Bros.[28]

Unlike many other adaptations where Thorin is depicted as white haired, Thorin is portrayed as younger looking (while in the original book, he was amongst the oldest of the dwarves in the company). Thorin, however, does have streaks of gray in his black hair.

Thorin is the only companion of the player, Bilbo Baggins.[29]

Thorin plays no role in the storyline, but makes a brief appearance in a flashback taking place in T.A. 2941.

Retrieved from "http://tolkiengateway.net/wiki/Thorin"
Categories: Characters in The Hobbit | Dwarves | Longbeards