Thráin fled with his father and a small group of companions when the dragon Smaug in T.A. 2770 descended on Lonely Mountain and sacked the Dwarven kingdom. King Thrór, Thráin, and the others eventually settled in Dunland and scratched out a meager living. Thrór was devastated by the loss of Erebor and left his people to journey north. He took a single companion, Nár, but left his son with his Ring of Power, along with the map and key to Lonely Mountain.

In T.A. 2790[2] Nár returned to tell Thráin that his father had been captured and butchered by the Orc-chieftain Azog when they had journeyed to the mines of Moria. Even worse, Azog had beheaded Thrór and carved his own name on Thrór's forehead to show the Dwarves that an Orc now ruled their ancestral home.

Thráin sat for seven days without eating or sleeping, until he stood and said "This cannot be borne!".[1]

Filled with righteous anger, by T.A. 2793[2] Thráin had gathered together a massive army of Dwarves to wage the War of the Dwarves and Orcs. The army included the exiles of Lonely Mountain, Thráin's kin from the Iron Hills under his uncle Grór, and even some Dwarves not of Durin's folk (probably the four Dwarf clans from the Orocarni in the east). One by one they assaulted the Orc-holds of the Misty Mountains, destroying their great warrens in Mount Gundabad and eventually facing Azog himself in Dimrill Dale (Azanulbizar in Khuzdul) before the East-gate of Moria.

In T.A. 2799[2] Thráin and his army fought the bloody Battle of Azanulbizar. While the Orcs were vanquished and Azog slain, the Dwarves took heavy losses, including Thráin's son Frerin, his cousin Náin, and Fundin father of Dwarven hero Balin.

King Thráin II wanted to enter Moria and reclaim it, but the Dwarves not of Durin's folk refused, saying that the city was not their Fathers' House; they had honoured Thrór's memory by fighting, and this was enough. Dáin Ironfoot had peered within the East-gate and also warned Thráin that Durin's Bane still dwelt within Khazad-dûm.[1]

After the war, Thráin and Thorin led the exiles of Lonely Mountain west to live in the Northern Blue Mountains. Over the next forty years Thráin grew increasingly consumed with the lost riches of Lonely Mountain. This may have been partly because of the Ring of Thrór.

In T.A. 2841[2] he left the Blue Mountains with a small group that included Balin and Dwalin. Travelling east, the group was constantly harassed by wolves, Orcs, and other fell creatures. In 2845,[2] while camped under the eaves of Mirkwood, Thráin disappeared and would never be seen again by his kin. The King of Durin's folk had been captured by Sauron's agents and was taken to the fortress of Dol Guldur in southern Mirkwood. There Sauron tortured Thráin, took back the last of the Seven Dwarf-rings, and left him in the dungeon to die.

In T.A. 2850,[2] while on a reconnaissance mission to Dol Guldur, Gandalf came upon Thráin, who was so diminished that he could not even remember his own name. Thráin gave Gandalf his last two possessions, the key and map to Lonely Mountain, and shortly thereafter died. Gandalf left him without knowing who he was.[1]

Much later Gandalf met Thorin Oakenshield near Bree and realized that the Dwarf he had found in Dol Guldur was Thráin, the vanished King of Durin's folk. Gandalf and Thorin discussed reclaiming Lonely Mountain, and Gandalf gave much assistance to Thorin and Company, including the map and key to Lonely Mountain, along with a suggestion that they include a burglar in their quest.[1]

Gandalf mentioned to the Fellowship, as they were debating about going into Moria, that he had been in the mines before looking for Thráin.[3] 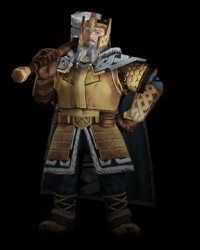 Thráin II in Guardians of Middle-earth.

Þráinn is a dwarf from the Dvergatal. It means "Stubborn".[4]

Thráin is played by Mike Mizrahi.[5]