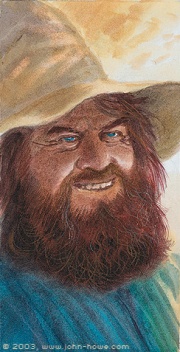 On September 26, T.A. 3018, he encountered four hobbits while he was searching for water-lilies for his wife. Two of those Hobbits, Merry and Pippin, had been captured by Old Man Willow. Tom, who was the master of the Old Forest, rescued them, and took all four of them to his house.[4]

Norman Shelley voiced Bombadil, and Tolkien thought his portrayal "dreadful". Goldberry was portrayed as his daughter, rather than his wife[9].

When he adapted the 1981 radio series, Brian Sibley deeply regretted cutting Bombadil from the radio series.[10] When he made Tales from the Perilous Realm into a radio series, he decided to change the section "The Adventures of Tom Bombadil". Rather than several (unadaptable) Hobbitish poems, Sibley adapted the chapters from The Fellowship of the Ring. Bombadil is voiced by Ian Hogg.

Bombadil is a summonable power. Once summoned, he can plow through enemy lines. His most powerful weapon is a "Sonic Song". As soon as EA secured the rights to the books, it was decided that Tom Bombadil should be in it; his appearance is kept close to his description in the book.[11]