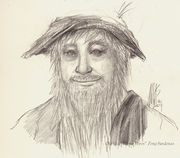 Tom Bombadil was inspired primarily from a dutch doll Tolkien's child(ren) toyed with.[10]

Probably in the 1920s he began writing a story entitled Tom Bombadil set during the reign of "King Bonhedig" in the British prehistory, far before any recorded events or invasions. The protagonist Tombombadil is mentioned as one of the oldest inhabitants of Bonhedig's kingdom, that spanned many miles on either side of the Thames. Only the 3 opening paragraphs survive of the shortly-abandoned, story, and the fragment ends at the description of Tombombadil who "wore a tall hat with a blue feather; his jacket was blue, and his boots were yellow".[11]

Around the 1930s or earlier Tolkien wrote a poem about some Tom Bombadil rowing down a River, a poem which Tolkien later identified as his "germ of Tom Bombadil".[12] Later in 1934 he put him into a poem, again described according to the appearance of the aforementioned doll (something that he did with other toys of his children, like Rover).[10] At one time he described him as a "spirit of the (vanishing) Oxford and Berkshire countryside"[13] When asked to make a sequel for The Hobbit, Tolkien briefly considered if he would base it around that figure of his poem,[13] who eventually appeared in the narrative.

Tolkien wrote Bombadil as a direct contrast to the artistry and (sub)creative force of the Elves; whereas they seek to create, devise, alter and control, Bombadil only observes and contemplates the world outside him and takes joy in it. He is the fearless theoretical science (learning, knowledge) of the world, and history.[14]}}

Paula Marmor notes that bobadil is an archaic word meaning "braggart", as seen in the character "Captain Bobadill" in the English play Every Man in His Humour. Because of its Bucklandish form, An Introduction to Elvish lists the name Bombadil under the "Celtic-sounding names". However, it is said that the word derives from Boabdil, the Spaniard name of Abu Abdillah Muhammad XII, the last Moorish ruler of Granada.[15]

John D. Rateliff has noted a theory launched by scholar Justin Noetzel. In the latter's paper "Beorn and Tom Bombadil: Mythology, Narrative, and The Most (Non) Essential Characters in Middle-earth", Noetzel suggests an association of Tom Bombadil with the Celtic Otherworld and tales of the Tuatha Dé Danann.[16]

Except the aforementioned earlier works written independently to the Legendarium, a figure that hints to Bombadil appears in the much later poem Once upon a Time. Tolkien wrote it around 1964 and reused the names of "Tom" and "Goldberry" (although the epithet "Bombadil" is not mentioned, the association can be made as he appears with Goldberry). Hammond & Scull note that in this poem Tom appears less omnipotent; while he is known to talk to all creatures, who always obey him, the mysterious lintips are the only ones who refuse to talk to him and hide away.[17] No specific events are mentioned that can connect it to Tom Bombadil or the legendarium of Arda.

Norman Shelley voiced Bombadil, and Tolkien thought his portrayal "dreadful". Goldberry was portrayed as his daughter, rather than his wife[18].

When he adapted the 1981 radio series, Brian Sibley deeply regretted cutting Bombadil from the radio series.[19] When he made Tales from the Perilous Realm into a radio series, he decided to change the section "The Adventures of Tom Bombadil". Rather than several (unadaptable) Hobbitish poems, Sibley adapted the chapters from The Fellowship of the Ring. Bombadil is voiced by Ian Hogg.

Bombadil is a summonable power. Once summoned, he can plow through enemy lines. His most powerful weapon is a "Sonic Song". As soon as EA secured the rights to the books, it was decided that Tom Bombadil should be in it; his appearance is kept close to his description in the book.[20]