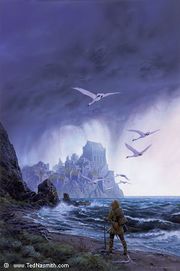 Tuor is Led by the Swans to Vinyamar by Ted Nasmith

Vinyamar (First Age c. 1 – c. 126) was a settlement built by Turgon in Nevrast on the slopes of Mount Taras at the beginning of the First Age. The name was Sindarin for "New Home".

The city was abandoned about 125 years after the rising of the Sun at Ulmo's behest, who told Turgon that he and his people must seek a abother home that would be hidden from the eyes of Morgoth.

Vinyamar was abandoned and fell into decay, but when Tuor was guided there by Ulmo he still found remnants of the great city.

Vinyamar's population was primarily Ñoldor, with a large influx of Sindarin elves.