The Wainrider/Balchoth War was a long series of battles spread over the first, second and third millennia of the Third Age. The first of these attacks occurred several centuries after the founding of Gondor. During this period, Gondor was under assault from the east by a number of eastern tribes variously referred as Wainriders, Easterlings, and Balchoth. After some serious setbacks for Gondor, they were at last decisively defeated.

Early in the Third Age, c. T.A. 490, Easterling tribes began a series of attacks against the southern Númenórean exile kingdom of Gondor. This first occurred during the reign of King Ostoher, who also rebuilt Minas Anor, in c. 490. His successor, Rómendacil I, defeated an Easterling invasion in T.A. 500, but was slain in a fresh assault by them in T.A. 541. His son, Turambar, once again defeated them, and captured a large area eastwards south of the Sea of Rhûn. Gondor was not troubled by Easterling attacks for centuries afterward, and by the reign of Ciryaher Hyarmendacil (c. 1050), Gondor was at the height of its power, controlling wide areas to the south and east.[1]

The Éothéod were a small group of Northmen in the Vales of Anduin during the middle Third Age. They first came to Gondor's notice during the reign of King Calimehtar of Gondor.[2]

King Calimehtar of Gondor had made common cause with Marhwini, lord of the Éothéod, against the Easterling raids. Marhwini was the son of Marhari, who fell fighting in Gondor's rearguard for Narmacil II at the Battle of the Plains. Marhwini sent word that the Wainriders were planning raids across the Undeeps into Calenardhon. He added that some of his people, Northmen enslaved near the forest of Rhovanion. Calimehtar led his army north through Ithilien, drawing the Easterlings towards him. As they approached the old Dagorlad battlefield, the main Gondorian force made their stand in what became known as the Second Battle of Dagorlad. Then, a Gondorian cavalry detachment, crossing the Anduin, joined with an éored led by Marhwini and attacked the Easterlings' flank and rear.

The Easterling army, under attack from three sides, broke and fled before the allies. Marhwini's mounted forces pursued them across the plains, taunting them about the smoke now rising from their homes to the north. The planned revolt did indeed break out, and caused heavy damage to the Wainriders' camps and storehouses. However, the rebels took heavy casualties from the youths, old men, and young women who were still relatively well armed. In the end, however, the allies were unable to control the eastern regions south of the Forest, and pulled back to the Dagorlad region. 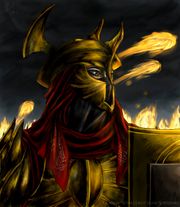