"In the end, this war must be ended by the smallest of things."
― Gandalf[1]

The War of the Ring was the great conflict at the end of the Third Age, named for the One Ring and the importance this had in the final outcome. The war was fought between the Free Peoples (a loose alliance of Elves and Men led by the Wise) and Sauron the Dark Lord of Mordor, with Saruman as a third power based in Orthanc. Sauron had been defeated in the War of the Last Alliance, but because of Isildur's refusal to destroy the One Ring, he was not entirely vanquished. He survived in spirit form, and the foundations of Barad-dûr were also not destroyed. While Sauron's spirit wandered the wastelands of Middle-earth for over 1000 years, eventually he rebuilt his power and became a threat once again.

Years before the War, while Sauron was known as the "Necromancer" and abode in Dol Guldur, Gandalf knew that should Sauron return, he would use the power of the Smaug, the last dragon, who dwelt in Erebor. Gandalf persuaded Thorin Oakenshield that he should reclaim Erebor for his people. With the assistance of Bilbo Baggins, Erebor was retaken and Smaug was finally killed by Bard. Most importantly, fate brought the One Ring into Bilbo's hands.

Saruman had claimed alliance with both the Wise and the Dark Lord, but was ultimately fighting for his own ends. In alliance with the Dunlendings, and having Orcs at his own command, his objective was the defeat of Rohan. Until late in the War, he held the advantage, defeating Rohan twice at the Battles of the Fords of Isen which are considered the beginning of the War. 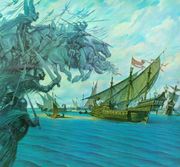 Sauron at all times held the military advantage in the War, due to his overwhelming forces; not only Orcs and Trolls, but Men of Harad and the East. His main immediate object was the overthrow of Gondor, his near neighbour and the strongest of his enemies. He had such forces at his command, though, that he was able to fight the war on many fronts, also attacking Dale, Erebor and the Wood-elves in the far north, and Lórien from his secondary stronghold at Dol Guldur. There can be no doubt that, had the Wise not achieved possession of the Ring, Sauron would ultimately have been victorious.

The policy of the Wise was based around the Quest of Mount Doom; a company of nine under the leadership of Gandalf travelled from Rivendell with the One Ring, with the hope of reaching Orodruin in Mordor and there destroying it. Because the Ring held much of Sauron's native power, they realised that in unmaking it, they would also defeat its creator.

Aragorn, after enlisting the help of Army of the Dead, attacked the Corsair fleet at Umbar, an assault he had also carried out decades earlier, during the Surprise Attack on Umbar.

The War did not end with the defeat of Sauron, for Saruman fled northward after the capture of Orthanc, and established himself in the Shire, bending the Hobbits to his will by threat of violence and the persuasive power of his voice. The return of Frodo Baggins and his companions led to a rebellion by the Shire-hobbits, in which Saruman was killed by his servant, Gríma Wormtongue.

Although Sauron and Saruman were both defeated, the Wise did not achieve total victory. With the destruction of the One Ring, the Three Rings that had maintained the realms of the Elves in Middle-earth lost their power, and the Elves began to leave Middle-earth for the Undying Lands.

Sauron and his Allies