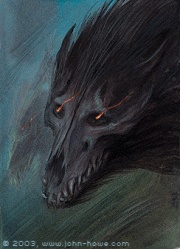 Taken from the Old English warg, the Wargs or Wild Wolves were a race of wolves. They are usually in league with the Orcs or Goblins whom they permitted to ride on their backs into battle. The Wargs speak a rudimentary language of their own. It is probable that they are descended from Draugluin's Werewolves of the First Age.

In The Hobbit, the Wargs appear twice, once in chasing Bilbo Baggins, Gandalf, and the dwarves just east of the Misty Mountains, and once at the Battle of Five Armies. In The Lord of the Rings, they are most prominently mentioned in the middle of The Fellowship of the Ring, where a band of Wargs, unaccompanied by Orcs, attacks the Fellowship in Hollin, and again in The Two Towers at the Battle of the Hornburg.

In Peter Jackson's The Lord of the Rings, wargs appear to be more like a "hyena-bear-wolf hybrid" rather than wolves, in an effort to distinguish them from regular wolves by presenting them as some sort of distant cousin. However, it should be noted that Tolkien never actually described Wargs beyond stating they were demonic wolves.

Retrieved from "http://tolkiengateway.net/wiki/Wargs"
Categories: Articles to be rewritten | Creatures | Wolves | Characters in The Hobbit