Watcher in the Water 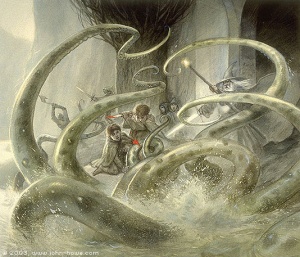 Watcher in the Water, by John Howe

The Watcher in the Water is a mysterious and horrific beast that lurked in a lake caused by the damming of the Sirannon river, beneath the western walls of Moria. There is very little known about the creature. Even Gandalf did not know what the Watcher was, or whether there were many of its kind.

The Book of Mazarbul documenting the doom of Balin's expedition to reclaim Moria, relates: "...run the pool is up to the wall at Westgate. The Watcher in the Water took Óin. We cannot get out."

The Watcher attacked the Fellowship of the Ring as they were attempting to open the Doors of Durin and enter Moria. It grasped Frodo with a long tentacle, possibly with a fingered end, which was pale green and luminous. Many other tentacles emerged from the water after the one which grasped Frodo was driven away, but it is not totally clear whether these were all part of the same multi-armed beast, or a number of monsters acting together. In any case, the creature or creatures possessed great strength; after the escape of the Fellowship into Moria, the arms hurled the enormous stone doors shut and uprooted the trees which grew to either side, barring the doors. Gandalf noted that it seized Frodo (as the Ring-bearer) first, and therefore was probably connected to Sauron in some way, or had a sense of its own detecting the One Ring.

The origins of the monster or monsters is unknown. Assuming it belongs to one beast, it might be a creation of Morgoth during the First Age, or a Maia like the balrogs. If it is more than one creature, then probably it can be assumed that they were from a submarine colony, probably once creatures of Morgoth that had crept down into hiding after the War of Wrath.

In the book A Tolkien Bestiary, the Watcher is identified as being a Kraken; it is implied that there are some differences between the kraken of Norse legend and the Watcher.

The Watcher is a green, multi-tentacled monster. Only the tentacles can be seen.

2001: Peter Jackson's The Fellowship of the Ring:

The Watcher in the Water was made to be slightly different than that in the book. In the book only green slightly translucent tentacles are shown. In this film not only the tentacles but a massive head is visible. The tentacles of the Watcher in the Water have a sort of thumb and flat hand. As well, there is a big sack on the back of the head that fills with air, making it look twice as big. In full form it resembles an octopus with a humanoid face. It has massive teeth in a small mouth, and great eyes set across from each other. The assumption is that all the tentacles came from one creature that dwelt in a cave at the bottom of the pool. This is one of the changes in the movie that few Purists have objected to.

Several thick tentacles shoot out of the pool, and the player, in the persona of Aragorn, needs to shoot them with a bow.