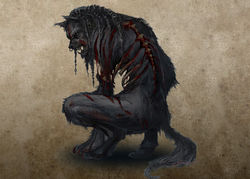 Werewolf sketch from The Lord of the Rings: The White Council game

Werewolves were servants of Morgoth, bred from wolves and inhabited by dreadful spirits (fallen lesser Maiar or fëar of Orcs).

They were created (or a least corrupted from some other form) by Sauron, who was their master, and who took the shape of a great wolf himself at least once. The Middle-earth werewolves were not shapeshifters like the Werewolves of European mythology — they were always in the form of beasts. The name werewolf appears to have been chosen because they were in essence sentient (but evil), and thus had a status beyond that of normal wolves.

The first werewolf was Draugluin, and the greatest werewolf was Carcharoth, the guardian of Angband, a descendant of Draugluin as all other werewolves were. Huan the Hound of Valinor, while also sentient, was not a werewolf.

It is probable that the Wargs of the Third Age were descended from the werewolves, as these wolves could speak, suggesting they had fëar. Another possibility is that Sauron attempted to recreate the werewolves after his return to Middle-earth, and that the Wargs were the result.