Åke Joel Ohlmarks (1911-1984) was a Swedish author, translator and historian of religion. He translated nine of Tolkien's works into Swedish and credited himself with publishing the first biography on Tolkien in the world. 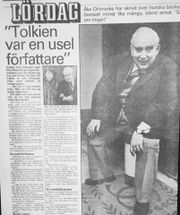 Interview with Ohlmarks in Aftonbladet, entitled "Tolkien was a lousy writer" (early 1980s).

Ohlmarks' translation of The Lord of the Rings (Sagan om ringen, Sagan om de två tornen and Sagan om konungens återkomst, collectively known as Härskarringen) was considered very bad by Tolkien, who expressed a strong dislike in Letters 228 and 229. Because of his experience with the Swedish and Dutch translations, Tolkien even wrote Guide to the Names in The Lord of the Rings to prevent further wrongdoing in translations.[1]

Several authors have pointed out that Ohlmarks' translation incorporated badly translated names, injection of adjectives and adverbs, and an archaic and poetic style not found in the original work. Above all else, it has been claimed that there are many errors based on insufficient knowledge of English.[2][3][4]

Not all comments on Ohlmarks' translation have been critical. Tolkien himself noted Ohlmarks' exemplary translation of Middle-earth to Midgård (similarly derived from middan-geard, the "old 'mythological' name"), and his rendering of Marigold into Majagull Ringblom (retaining its English sense as both a flower-name referring to the golden colour and personal name).[5] Anders Stenström has noted some other cases, where Ohlmarks' knowledge of Old Norse language and literature enabled him able to to make a good translation of certain names.[3]

However, the negative critique outweighed the positive.[3] In the 1970s, Ohlmarks became enraged when Christopher Tolkien wrote that he would only allow a Swedish translation of The Silmarillion if Ohlmarks was not connected to it.[6]

Two years before his death, Ohlmarks blamed Swedish Tolkien fans for a fire to his house, and wrote Tolkien och den svarta magin, "Tolkien and the Black Magic". In it, he concocted a conspiracy theory that claimed Tolkien, and The Tolkien Society, practised black magic and Nazi occultism.[7]

In 2004, a new Swedish translation of The Lord of the Rings, made by Erik Andersson, was published.[3]