A Short Rest is the third chapter of The Hobbit. 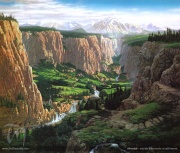 The valley of Rivendell
Following their ordeal with the three Trolls, the adventurers continued their journey eastward. As they came within (what they thought) a days journey to the feet of the Misty Mountains, Bilbo asked "Is that The Mountain?". Balin explained that the Mountains ahead were merely one obstacle in the path towards the Lonely Mountain.

Gandalf informed the party that hidden somewhere before them was the valley of Rivendell and that he had told his Elf-friends to expect their arrival. Gandalf led the way on a path - it seems - he knew very well. Just as the Dwarves and Bilbo were growing anxious, they came across unexpected valleys. Gandalf continued to lead them and eventually they saw a fair valley far below them. Following a slippery journey down a zigzag path they entered Rivendell, where the Elves greeted them with song and laughter from within the trees.

At last they came to the Last Homely House,[1] where they stayed (quite happily) for at least fourteen days.

On midsummer eve[2], Elrond inspected the swords which Thorin and Gandalf had acquired from the Troll's Cave. The runes on Thorin's sword named it Orcrist, the Goblin-cleaver; the runes on Gandalf's sword read Glamdring, Foe-hammer - both were ancient blades forged in Gondolin. Elrond then inspected Thrór's Map, he found Moon letters which read: "Stand by the grey stone when the thrush knocks, and the setting sun with the last light of Durin's Day will shine upon the keyhole."

On Mid-year's Day's morning, the adventurers departed from Rivendell for the Misty Mountains and the land beyond.