Aldor was the second son of King Brego, but became the heir to the throne when his older brother Baldor vanished in T.A. 2569, in an attempt to tread the Paths of the Dead. His father Brego died of grief in 2570 so Aldor then became the King of Rohan. He reigned for seventy-five years, the longest of any ruler of Rohan, and became known as Aldor the Old.

During his reign the population of the Rohirrim increased. The remaining Dunlendings east of the Isen River were either driven out or subdued, and Harrowdale and other valleys in the Ered Nimrais were settled.

Aldor had three daughters before his first son, Fréa, was born.[1] 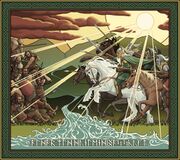 The Lord of the Rings Online tapestry: Aldor the Old drives the Dunlendings out of the Westfold

2012: The Lord of the Rings Online:: A tapestry depicting Aldor the Old is found in Meduseld and can be acquired for use in players' housing.