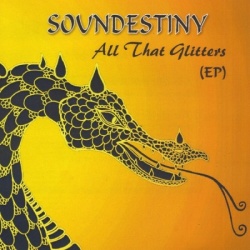 All that Glitters cover

All that glitters is an EP or mini-album by Soundestiny that was released in 2009.

This is a short CD of music inspired by The Hobbit with original songs written by Darryl Grant Potter. In 2009, Soundestiny were busily recording a full length album of Hobbit-inspired songs and decided to take a break from the project to finish their Winds of Change album. Consequently, it was decided to release four of the already-recorded Hobbit songs as an EP; the full album of songs inspired by The Hobbit was released in 2012 as Dragon Quest. The four songs on All that Glitters are a brief, musical glimpse into Tolkien's magical, fantasy world that later became even more famous with the publication of The Lord of the Rings.