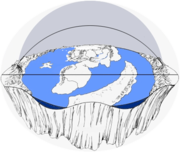 The flat World during the Second Age

Ambar also refers to "The World" with the connotation of "habitation" or "home" ("Oikoumene"[3]), which referred to the inhabited world, as opposed to the barbaric wild.

In this sense Ambar is different than Arda, which refers to the world as a physical whole.

The Elves may have equated the concept of "doom" with the inhabited world because their fëar were tied eternally with Arda, as opposed to Men, whose souls escape beyond the world upon death (see: the Gift of Men).

Furthermore, the roots MBAR and MBAR-AT might be ultimately related.