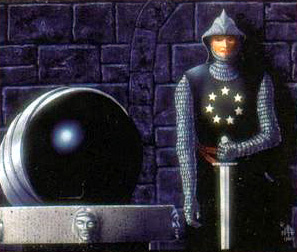 The Amon Sûl-stone was a palantír that rested in the Arnorian Tower of Amon Sûl. Like the other seeing-stones it was a deep black crystal, spherical, and perfectly smooth. However, the stones were not all alike and the Amon Sûl-stone, like the Osgiliath-stone, was too large to be lifted by one man.[1]

The Amon Sûl-stone was placed on Amon Sûl by Elendil when the realm of Arnor was founded. After the division of Arnor in T.A. 861[2] both Rhudaur and Cardolan contended with Arthedain for possession of Amon Sûl for they desired the Amon Sûl-stone.[3]

In T.A. 1409 the watchtower was burned and destroyed when Angmar's forces invaded Arnor, but the Stone was successfully carried back to Fornost.[2] Arthedain's last King, Arvedui, saved this palantír as well as the Annúminas-stone when Arthedain was overrun by Angmar in 1974.

With these and other heirlooms, he fled into the far north, where he was given shelter by the Lossoth. At last a ship from the Grey Havens came to rescue Arvedui, but after he had boarded, its hull was crushed by the ice, and all aboard were lost. The Stone of Annúminas, along with that of Amon Sûl, were lost in the shipwreck, and sank.[3]

The card Palantír of Amon Sûl was released in two versions in two different sets: Middle-earth: The Wizards and Middle-earth: The Lidless Eye. A Resource Item, the card can be used by a player to look at the opponent's hand.[4]