Anárion (Q: "sun-son", pron. [aˈnaːri.on], stem Anáriond-) was the second son of Elendil and the brother of Isildur.[1] His son Meneldil was the last man born in Númenor before its Downfall.[2]

Anárion, together with his father and brother, were the leaders of the Faithful, the small minority of Númenóreans that resisted the dark rule of Ar-Pharazôn and his councilor Sauron. In S.A. 3319, when Ar-Pharazôn assailed the land of Aman,[3] nine ships of the Faithful escaped to the east (four for Elendil, three for Isildur, and two for Anárion).[4] They were separated by the great storm that arose during the Downfall. Elendil landed in northern Middle-earth near Lindon and there established the realm of Arnor. Isildur and Anárion, however, landed in the south and founded the realm of Gondor in 3320 about the Mouths of Anduin.[1]

Together, Anárion and Isildur were chiefly responsible for the early ordering of Gondor, and their thrones were set side by side in the Great Hall of Osgiliath. In the city of Minas Anor, Anárion established his house while Isildur set up his in Minas Ithil.

Sauron also survived the Downfall of Númenor and reentered Mordor in 3320. In 3429, Sauron attacked Gondor with a force great enough to take Minas Ithil and force Isildur to flee. Whilst Isildur, his wife, and his sons sailed from Gondor seeking Elendil’s aid, Anárion defended Osgiliath and was able to drive his forces back into the mountains. Yet Sauron gathered greater strength and Anárion knew that without succor Gondor would fall.[3][1]

Aid did arrive when Elendil, Isildur, and the Men of Arnor, in league with the High King of the Noldor, Gil-galad, formed the Last Alliance of Elves and Men and marched south. Anárion led the Gondorians to the plain between Cirith Gorgor and the Dead Marshes and fought in the Battle of Dagorlad alongside the alliance. The allies entered Mordor and laid the Siege of Barad-dûr, but Anárion was slain by a thrown rock in 3440.[5] 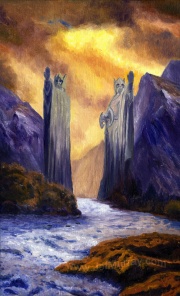 Anárion had four children, the youngest of whom was a son, Meneldil.[Note 1] It is said that he was well-pleased at the departure of Isildur and his sons.[2] After the Disaster of the Gladden Fields, Meneldil became the first independent King of Gondor and the two realms in exile were estranged.

Anárion's war-helm, which was also used as a crown, was crushed when he was killed. The war-helm of Isildur was used for the crowning of the Kings of Gondor.[6]

The Line of Anárion lasted over two thousand years. In honor of the founding co-rulers, when Rómendacil II built the Argonath he had the Pillars of the Kings carved in the likenesses of Anárion and Isildur.[7] Yet the line of Anárion dwindled and finally disappeared when King Eärnur died childless. From that time forth the Ruling Stewards ruled in the name of the House of Anárion.[8]

Anárion in The Lord of the Rings Trading Card Game

In The Peoples of Middle-earth, in Section VII "The Heirs of Elendil", Christopher Tolkien explained that there were three manuscripts in the textual history of this section. Manuscript A contained the information about the Southern Line of Gondor, and from its condition it appeared to be the first stage of composition. Manuscript B added the Northern Line, and began as a fair copy of A for the Southern line but became heavily emended. Manuscript B led to Manuscript C, a fine copy (but with later emendations), which led to a final typescript D. In the earlier Manuscripts A and B, Anárion's date of birth was S.A. 3209 instead of S.A. 3219. It was Isildur who was born in 3219 instead of 3209 and thus Anárion was the older of Elendil's two sons.[5]

Anárion in The Lord of the Rings Online

Although Anárion does not appear in The Lord of the Rings film series, Decipher produced a card for the character.

Anárion appears during an extended flashback set during the Siege of Barad-dûr in the year S.A. 3440, shortly before his death.