The Angmar War was a centuries-long struggle between the Men of Arnor and the forces of Angmar, led by the Witch-king.

After the death of King Eärendur, the Kingdom of Arnor was split into three parts: Arthedain, Cardolan and Rhudaur, due to tension between Eärendur's sons. There was often strife between the three kingdoms, usually over control of the Weather Hills and the palantír of Amon Sûl.[1] 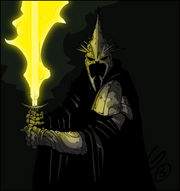 During the reign of Malvegil of Arthedain (c. T.A. 1300), the realm of Angmar was established by the Witch-king, beyond the Ettenmoors, with the intention of weakening the Northern Dunedain. It was not yet known that the Witch-king was indeed the chief of the Ringwraiths. He filled his domain (which also extended into the upper Vales of Anduin) with Orcs, evil Men, and fell creatures.[1]

Argeleb I of Arthedain claimed the kingship of all Arnor, the line of Isildur having failed in Cardolan and Rhudaur. In Cardolan, this claim was recognized; however, Rhudaur resisted the claim for an evil lord of the Hill-men, whose allegiance lay with Angmar, seized power since the Dúnedain there were few. Argeleb fortified the Weather Hills, but was killed in battle with Rhudaur and Angmar in T.A. 1356.[2] His son Arveleg I received help from Cardolan and Lindon, and was able to drive the enemy back from the Weather Hills. After this the forces of Arthedain and Cardolan held, for many years, a frontier along the Weather Hills, the East Road and the lower Hoarwell. During this period the Witch-king besieged Rivendell, but failed to take it.[1]

In T.A. 1409, the Witch-king launched a massive assault upon Arnor, circling around the Dúnedain defences to invade Cardolan from the south. Causing huge destruction, the host of Angmar marched north to Amon Sûl. The great watchtower was taken and destroyed, although its palantír was saved and brought to Fornost. In this war both Arveleg and the last prince of Cardolan perished.[3] The remaining Dúnedain in Rhudaur were slain or driven west, while those of Cardolan held out only in Tyrn Gorthad and the Old Forest. Fornost meanwhile was beset by the armies of Angmar, but Círdan brought reinforcements out of Lindon, enabling the young king Araphor to repel his foes from the North Downs.[1]

Arnor had been weakened hugely but the Witch-king was unable to press home his advantage because, at this point, the Elves unleashed their remaining strength upon Angmar. Elrond persuaded King Amroth to send a force of Galadhrim over the High Pass to Rivendell. Together with their kinsfolk of Lindon, they dealt such a blow to Angmar that it was subdued for centuries.[1]

Arnor, however, was unable to recover its former strength. Much of its territory was already deserted, prompting Argeleb II to grant the Shire to the Hobbits in T.A. 1601.[2] In the seventeenth century a Great Plague came from out of the East, devastating Rhovanion and Gondor. While Arthedain was relatively unaffected, Cardolan suffered greatly and the remaining Dúnedain in Tyrn Gorthad perished. The Hobbits of the Shire also saw great loss, but their numbers recovered in time. In the wake of the Plague, evil spirits came down out of Angmar and Rhudaur and reanimated the corpses of the Dúnedain of the Barrow-downs.[1]

The North-Kingdom nonetheless had peace for a time, but in the nineteenth century Angmar renewed its attacks. King Araval with Elves of Lindon and Rivendell won a battle in Cardolan (T.A. 1851)[4] but was unable to reoccupy it; in the same year, Gondor was attacked by the Wainriders for the first time.[2]

Suspecting that these attacks might be being coordinated by a single power, the two kingdoms finally brought to an end their years of estrangement. In T.A. 1940, Arvedui heir to the sceptre of Arnor, wedded Fíriel, the daughter of King Ondoher of Gondor. Soon Ondoher was slain in battle and hoping to save Arnor from Angmar, Arvedui staked his claim to Gondor, by right of his descent from Elendil and by that of his wife. The lords of Gondor however were not for reunification, and chose Eärnil as their king. Eärnil nonetheless maintained good relations with Arnor, promising them aid against the continuing attacks of Angmar.[5]

Arvedui succeeded his father in T.A. 1964, but Arnor's strength was fast dwindling. In T.A. 1973 he sent a message to Eärnil that they were in great straits, and that Angmar was preparing its final assault. Eärnil accordingly mustered a great army, including many horsemen from Vales of Anduin, under the command of his son Prince Eärnur. The Gondorian force put to sea, but would not arrive in Lindon before Angmar struck.[5][1]

[edit] Fall of the North-kingdom

In T.A. 1974 the Witch-king amassed his forces and launched a final assault on Arthedain. The Witch-king attacked during the harsh winter weather and took Fornost. The remnants of the Arnorian forces fled west over the river Lune but Arvedui held out for a short time in the North Downs. He and a few surviving companions were eventually forced to flee to the abandoned mines of the northern Ered Luin. With their food running out, they sought refuge with the Lossoth of Forochel. Receiving word of the King's whereabouts, Cirdan sent a ship to the Icebay to rescue him. Against the advice of the Lossoth chieftain, Arvedui boarded the ship, which that night was wrecked by a storm from the North. Arvedui drowned, and with him were lost the palantíri of Fornost and Amon Sûl.[1]

The Witch-king now sat the throne in the king's palace, but it was not long before Eärnur arrived in much joy and wonder among Elves and Men. There were so many ships that the fleet filled Forlond, Harlond, and the Grey Havens; amazing the people of the North, even though this was but a small part of Gondor's strength. Once Círdan summoned the Elves of Lindon and what remained of the Men of Arnor, the allied host marched across the Lune to challenge the occupiers of Fornost.[5]

The Witch-king, confident and proud after his recent victories, did not prepare for a siege, but sent his army out to face the Host of the West. The Host came down from Hills of Evendim and engaged the forces of Angmar in the plains between Nenuial and Fornost. The Host of the West had the better of the fighting, and the forces of Angmar began to retreat back to Fornost. Suddenly, out of the north, came the main body of the cavalry, which had passed around the Hills and outflanked the enemy. They fell upon the forces of Angmar and scattered them in a great rout. The Witch-king gathered what troops he could and tried to lead them back to Carn Dûm but was overtaken by the cavalry of Gondor led by Prince Eärnur. At the same time a force of Elves led by Glorfindel came up out from Rivendell and the remnants of Angmar's army were utterly destroyed. Near the end of the battle, the Witch-king attempted to slay Eärnur, but fled upon the appearance of Glorfindel. So utterly was the host of Angmar crushed that not a single Man or Orc of that realm remained west of the Misty Mountains.[5]

Two years after the Battle of Fornost, Frumgar led the Éothéod into the northern Vales of Anduin, and drove away what remained of the people of Angmar on the east side of the Mountains, thus being the final act of the centuries-long conflict.[6]

The destruction brought about by the war left Eriador heavily depopulated and the North-kingdom in shambles. Arvedui's son Aranarth would not take any kingship but took the title of Chieftain of the Dúnedain for his people, the Dúnedain of Arnor, were too few and took to a secretive, nomadic lifestyle.[1]

The Shire-folk survived, though war swept over them and most of them fled into hiding. Afterwards in the peace that followed the Shire-folk ruled themselves and prospered. They chose a Thain to take the place of the King, and were content; though for a long time many still looked for the return of the King.[1]

Fornost was not resettled after the war and stayed a lonely ruin, feared by the Men of Bree, who called it Deadmen's Dike. Not until a thousand years later after the War of the Ring was Arnor and its great cities, Annúminas and Fornost Erain, restored under King Aragorn II Elessar.[7][1]

Later in the Third Age, Gandalf believed that Sauron wished to re-establish control over Angmar and the northern passes, but was unable to do so because of the Dwarves of the Iron Hills and the Men of Dale. Without them (according to Gandalf), there would have been war in Eriador again.[8]