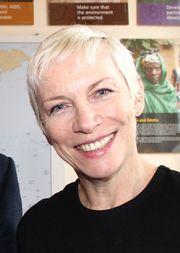 Annie Lennox won an Oscar for Into the West

Ann Griselda Lennox (December 25, 1954), is a Scottish singer. She recorded "Into the West" for The Lord of the Rings: The Return of the King, which won her several awards.

She also recorded the less known "Use Well the Days". This song was not used in the film, but appears on a bonus DVD included with the "special edition" of the film's soundtrack CD.