Arnor, or the North-kingdom, was one of the two Kingdoms of the Dúnedain (the other being Gondor in the south) in the land of Eriador in Middle-earth. It was the original seat of the High King who ruled over both Arnor and Gondor. 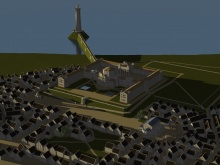 After the Downfall of Númenor, Elendil and his followers reached Eriador by sailing through the Gulf of Lune and into the lands of Lindon. There, he befriended the High King of the Noldor Gil-galad.[1] Elendil founded Arnor at the end of the Second Age (S.A. 3320), while his sons founded the southern realm of Gondor. He established the city of Annúminas as his capital. Both kingdoms of the Númenóreans were known as the Realms in-Exile, and their histories are intertwined.

The Númenóreans in Arnor dwelt in many places in Eriador, especially along the courses of the Lhûn and the Baranduin; but their greatest city was at Annúminas beside Lake Nenuial where was the seat of their king.[1] They also dwelt at Fornost Erain upon the North Downs, in Cardolan, and in the hills of Rhudaur. The Númenóreans also raised a great watchtower upon Amon Sûl.[1] Arnor was, from the beginnning of their history, always less powerful and less populous than its southern counterpart, Gondor, despite its presendence over the South-kingdom as the seat of the High King.[2]

In the region of Arnor, many already dwelt who were in whole or part of Númenorean blood who welcomed Elendil.[1][3] In fact, the native Men of Eriador accepted the new rule of Elendil and helped to people and maintain the many places that the Númenóreans built.[1] When Elendil led his people into the south to battle against Sauron, these Men of Eriador marched alongside the Dúnedain.[1] The Men of Bree also became subjects of Arnor.[3]

[edit] War of the Last Alliance 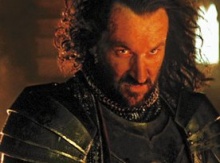 Isildur in Peter Jackson's Fellowship of the Ring

In S.A. 3430, Arnor allied itself with Gil-galad in a great alliance opposing Sauron, the Last Alliance of Elves and Men. In conjunction with southern forces from Gondor, they confronted Sauron's armies in the War of the Last Alliance. Elendil, King of Arnor was slain in this conflict, but Isildur, his eldest son, cut the One Ring from Sauron's finger and prevailed.

Isildur, the second King of Arnor, was killed in T.A. 2 in the Disaster of the Gladden Fields.[4] His three eldest sons were killed with him, but the fourth and youngest, Valandil, who had remained at Rivendell due to his youth, became the first King of an independent Arnor in T.A. 10.[4] Valandil, Isildur's youngest son, took up his rule in Annúminas, but his people were diminished and there were too few people to maintain the places Elendil built; many of the Men of Arnor (both Númenóreans and the native Men of Eriador) had died in the War of the Last Alliance and at the Disaster of the Gladden Fields.[1]

After the reign of Eärendur in T.A. 861, the seventh king that followed Valandil, Arnor became divided into the kingdoms of Arthedain, Cardolan, and Rhudaur, owing to dissensions and strife among his sons.[1][5] 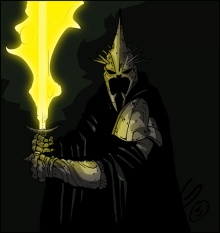 There was often strife between the three kingdoms, usually over control of the Weather Hills and the palantír of Amon Sûl.[5] Seeing the disunion in Arnor, Arnor's greatest enemy in the north by the middle of the Third Age (c. T.A. 1300) was Angmar, ruled by the Witch King of Angmar.[5]

Years later, Arnor was refounded de jure by the seventh King of Arthedain, Argeleb I, when Cardolan placed itself under the suzerainty of Arthedain as the line of Isildur had failed in the other kingdoms.[5] This claim was resisted in Rhudaur, where the Dúnedain there were few, and a lord of the Hill-men, whose allegiance lay with Angmar in secret, seized power.[5]

Although the northern parts of Arthedain were little affected, Arnor was heavily affected by the Great Plague; the joint garrison (of Arnor and Gondor) at Tharbad ceased to exist[6] and the last of the Dúnedain of Cardolan died on the Barrow-downs.[5]

In spite of the North-kingdom variously and periodically allying with Cardolan, Lindon, Imladris, and Lothlórien, the forces of Angmar proved too powerful as it systematically destroyed the remnants of Arnor. It was only in T.A. 1974 that the Witch-king invaded Arthedain and captured Fornost Erain, thus ending the dominion of the North-kingdom. Although the Host of the West destroyed Angmar in the following year, the people of Arnor had become too diminished to restore their kingdom.[5][7]

The Shire was a fertile and well-tilled part of Arnor, but deserted during the waning days of the Kingdom when it was known as the splinter-realm of Arthedain; it had been the hunting grounds of the King of Arnor. The Hobbits (who lived in Dunland and parts of depopulated Cardolan and Rhudaur) got official permission from King Argeleb II at Fornost to settle the lands. This was finally done in T.A. 1601 by Bree-hobbits led by the brothers Marcho and Blanco. By 30 years later, almost all of the Hobbits of Middle-earth could be found in the Shire. The Shire-hobbits considered themselves as subjects of the King, at least nominally, considering the isolation of their country. Nevertheless, the Hobbits sent some support troops to the great battles Arnor fought against Angmar.[5] After the fall of Arnor, the Shire remained a minor but independent political unit and the title of Thain was established to fill the absence of a Kingship.[5]

[edit] Chieftains of the Dúnedain

Main article: Chieftains of the Dúnedain

Aranarth, son of Arvedui Last-king, perceived that the Northern Dúnedain had become too few to reestablish the North-kingdom. Instead of calling himself a king or prince, he assumed the title Chieftain. Through them the royal line of Arnor was maintained successfully for a thousand years until the refounding of Arnor on 1 May, T.A. 3019. Aranarth brought his son, Arahael, to Rivendell and gave him to Elrond for safekeeping until he was grown. This became a tradition that was followed through the rest of the Third Age. Thus, the Dúnedain of Arnor were reduced to a few Rangers wandering secretly in the wild. It was only in Imladris where they were remembered; there, the Heirs of Isildur were harboured and their line, from father to son, remained unbroken.[1][5]

Main article: War of the Ring

Although the North-kingdom had been fallen for a thousand years by the time the War of the Ring broke out, northern forces did participate in the War. Aragorn II, the Chieftain of the Dúnedain at the time, was a Ranger of the North, and there were several hundred of them operating during the conflict.

[edit] Restoration of the North-kingdom 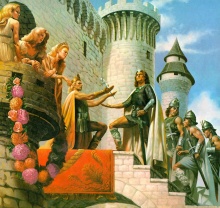 Aragorn II was crowned by Gandalf as King Elessar, as refounded Arnor as part of the greater Reunited Kingdom. The Reunited Kingdom included all the lands of Arnor in the North; all of Eriador, except the regions beyond the Lune, and the lands east of Greyflood and Loudwater, in which lay Rivendell and Eregion.[5] The Shire was an exception to this, and though it lay within Arnor, Aragorn made a law that Men should not enter it, a law that he observed himself.[5] He rebuilt Annúminas and when he went north, would rule from there.[5] He also had the ruins of Fornost Erain rebuilt and made into a great city once again.[8]

The Númenórean monarch of Arnor governed the realm and its people with the frame of ancient law, of which he was administrator (and interpreter) but not the maker.[9]

After his accession, Aragorn also established a council in Arnor, because in Fo.A. 13, he chose three Counsellors of the North-kingdom from the people of the Shire and Buckland.[10] These Counsellors were those appointed to the positions of the Thain and Mayor of the Shire, and the Master of Buckland.[10]

Arnor included all of Eriador at its greatest, except the regions beyond the Lune, and the lands east of Greyflood and Loudwater, in which lay Rivendell and Eregion.[5] Arnor also seemed to have claimed the coasts as far north as the icy Bay of Forochel as part of its dominion.[3]

There were seven palantíri in total. The northern kingdom possessed three, and the southern kingdom held the other four.[1]:362 They were:

Westron, or the Common Speech, was the native language of the people of Arnor.[11] Among the Dúnedain however, including those of Arnor, the kings and high lords, and indeed all those of Númenorean blood in any degree, for long used Númenórean Sindarin.[12] Quenya was known to the learned of Arnor, a tradition which has continued from the loremasters of Númenor, to be used for places of fame and reverence in addition to the names of royalty and men of great renown.[3] All the royal names of the Kings of Arnor were Quenya names.[13] The Kings of Arthedain and later the Chieftains of the Dúnedain, however, took Sindarin names.[13]

Arnor was the colloquial name for the North-kingdom. The North-kingdom, as the land was called at its conception, was also known as Turmen Follondiéva in Quenya and Arthor na Forlonnas in Sindarin. These names quickly fell out of use, in favour of Arnor: the Land of the King, so called for the kingship of Elendil, and to seal its precedence over the southern realm. In full, poetic Sindarin, it was called Arannor, which mirrored its Quenya name, Arandórë.[14] Though technically Arandórë would have a Sindarin form Ardor, Tolkien chose Arnor because it sounded better. This linguistic change was ascribed to a later, Mannish development of Sindarin.[15][16] The form Arnanórë is also seen.[15]

2002: The Lord of the Rings: The Two Towers (Extended Edition)

Peter Jackson's movies do not mention the long history of how Arnor and Gondor diverged, nor do they mention Arnor by name. The one passing reference to it is in a scene from the Extended Edition, when Aragorn reveals to Éowyn that he is actually eighty-seven years old. She realises that he must be one of the Dúnedain, a descendant of Númenor blessed with long life, but says that she thought his race had passed into legend. Aragorn acknowledges that he is one of the Dúnedain, and explains that there are not many of his people left, because "the Northern kingdom was destroyed long ago".