Arvedui you shall call him, for he will be the last in Arthedain. Though a choice will come to the Dúnedain, and if they take the one that seems less hopeful, then your son will change his name and become king of a great realm. If not, then much sorrow and many lives of men shall pass, until the Dúnedain arise and are united again.[3]

Arvedui married Fíriel, the daughter of King Ondoher of Gondor, in 1940, repairing the link between the two Realms in Exile after years of estrangement. In 1944, Ondoher, and his sons Artamir & Faramir were slain in a battle against the Wainriders. Arvedui sent messages to Gondor claiming the kingship , both as a descendant of Isildur and as the husband of Fíriel, who, under old Númenórean law, should have become the first ruling queen. In 1945 the Council of Gondor, persuaded by the Steward Pelendur, voted against Arvedui's claim in favour of Eärnil - a distant relative of the King and the victorious general in the war on the Wainriders.[3]

The snowmen were unmoved by the Arnorians' jewels but helped the gaunt king and his men out of pity and out of fear of their weapons, giving them food and building them snow-huts. Arvedui and his men had to stay there as their horses had perished, and kept a fire constantly alight waiting for help. That winter was especially long and rough. In 1974, when Círdan heard from Arvedui's son, Aranarth, of his plight, he sent a ship to Forochel to find him. When the ship arrived in March of that year, the ice-men were frightened for no ship had ever been seen in those waters in living memory, and the chief of the snow-men counselled Arvedui:

Do not mount on this sea-monster! If they have them, let the seamen bring us food and other things that we need, and you may stay here till the Witch-king goes home. For in summer his power wanes; but now his breath is deadly, and his cold arm is long.[4] 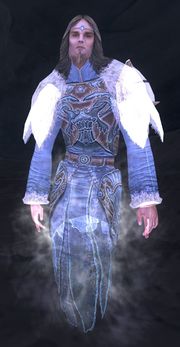 In his last moments, Arvedui despaired and cursed himself for his pride in ignoring the warning of the Lossoth. Because of this, his shade remained lingering at the wreck of the ship Thoroval in the ice near the western coast of the Icebay. During the War of the Ring, the shade of Arvedui is discovered by the player in search for the artifact carried by one of the Elves aboard the vessel. At Arvedui's request, the player recovers a book of heraldry that had been left in the Dwarf-mines he Last King had hidden in, and delivers the book to the Ranger Lothrandir.[7] Elrond urges the player to look for a way to help Arvedui to move on, and together with Arvedui's help Lothrandir and the player uncover and stop a plan of Angmarim in Forochel. In the process, Arvedui learns that an heir of his line still lives and is working towards reclaiming the throne of Gondor and reuniting the two Kingdoms. This knowledge brings Arvedui peace and he feels that he will be able to finally depart Middle-earth upon Aragorn's coronation.