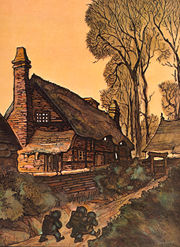 Bamfurlong was a farm in the boggy region of the Marish in the eastern Shire. It was the home of Farmer Maggot,[1] who (like the other Hobbits in this inhospitable area) lived above ground rather than in a traditional Hobbit-hole. Farmer Maggot's farm was well-known in the area for his mushrooms, which he protected fiercely against trespassers with his three fearsome dogs.

The center of the farm consisted of a large farm house made of brick with thatched roof and associated farm-buildings. They were all enclosed within a high wall with a wooden gate to the outside Maggot's Lane. The lane led out of the farm and after one-two miles crossed a deep dike, and climbed onto the high bank of the causeway between Rushey and Stock; five miles north was the Bucklebury Ferry.

When Frodo Baggins was young and lived at Brandy Hall he occasionally sneaked onto the farm to poach some mushrooms. On the last visit Maggot had caught Frodo and gave him a beating for his thievery. Frodo avoided the place and him ever after.

On 25 September T.A. 3018, Frodo, Sam, and Pippin came to Bamfurlong in the afternoon. There they met Farmer Maggot and learned that earlier a Black Rider had visited the farm and enquired about Baggins. The travelling hobbits gratefully accepted a hearty supper before the farmer drove them to Bucklebury Ferry in his wagon.[2]

The name Bamfurlong represents Old English Beanfurlang, "a furlong of beans" or simply "bean-field".[3] A furlong means "forrow-length" and is a division of a common field.

Bamfurlong is a real-life English place-name.[4]

The name did not appear in the first edition: it first appeared in Bombadil Goes Boating and afterwards in the 1967 second edition onwards.

Retrieved from "http://tolkiengateway.net/wiki/Bamfurlong"
Category: The Shire