"He was great of growth  and goodly-limbed,
but lithe of girth,  and lightly on the ground
his footsteps fell  as he fared towards them,
all garbed in grey  and green and brown—
a son of the wilderness  who wist no sire."
― Túrin Son of Húrin & Glórund the Dragon, vv.196-200

Beleg Cúthalion was a Sinda who served King Elu Thingol of Doriath. He was considered to be the best archer and huntsman of his time. He became a friend and brother-in-arms of Túrin, falling victim of the cruel doom surrounding Túrin.

Together with Mablung, Beleg was one of the great captains of the Sindar. Beleg was captain of the Marchwardens and therefore was usually on duty on Doriath's northern borders near Brethil, Dimbar and Nan Dungortheb. Beleg carried a black bow named Belthronding, to which his epessë (surname) referred, and an arrow called Dailir.

If he went outside of Doriath, he was often accompanied by Mablung, like when they attended the Mereth Aderthad.[3] They were also the only Iathrim who joined the hosts of the Noldor in Nirnaeth Arnoediad.[4] 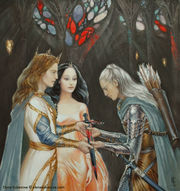 Later, he became a good friend and brother-in-arms of Túrin Turambar, and thus became ensnared in Túrin's accursed fate. For a long time Túrin joined Beleg in Dimbar.

Beleg was captured by the band of outlaws Túrin led near Amon Rûdh and was tortured, because Túrin was not present. He brought word from Thingol to Túrin that he was free to return to Doriath, but Túrin neglected the offer. After returning to Thingol to bring the news, Beleg returned into the north marches; when winter came, he set out again to join Túrin.[5]

Together with Túrin, Beleg became for a while a captain of the Outlaws against Morgoth. The place where they dwelt became known as Dor-Cúarthol, the "Land of Bow and Helm". Beleg healed Andróg from an arrow wound, causing the hatred of Mîm who not only hated the Elves, but also because Andróg was his enemy. When Mîm was captured by Orcs, he didn't hesitate to reveal where the outlaws had their refuge.

After fierce battle upon the top of Amon Rûdh all men were slain and Túrin captured. Beleg was bound and left back alive, as was demanded by Mîm who wanted to deal with the Elf personally. But Andróg was still alive, though mortally wounded, and he chased Mîm away and cut through Beleg's bonds before dying.[6] 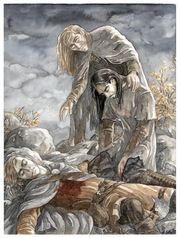 Beleg carried Túrin away from the camp and cut his bonds with his sword. But the blade slipped away and cut into Túrin's flesh. Awaking suddenly and filled with terrible memories of past torture, Túrin only perceived a shape bent over him with a blade and believed the Orcs were about to torture him again. Finding his hands unbound, in a sudden rage of self-defence, Túrin wrested Anglachel from Beleg and killed him.

Beleg was buried along with his bow Belthronding by Túrin and Gwindor. Anglachel had turned black and blunt when it spilled its master's blood. But Gwindor took it with him, for he deemed it better to use the blade for vengeance against Morgoth, than to leave it rotting in the earth.[7]

Túrin afterwards cried for Beleg and made a song for him, named Laer Cú Beleg, the Song of the Great Bow. Years later, Túrin faced his destiny in Cabed-en-Aras, commiting suicide after addressing Gurthang with courteous words:[8]

"Hail Gurthang! No lord or loyalty dost thou know, save the hand that wieldeth thee. From no blood wilt thou shrink. Wilt thou therefore take Túrin Turambar, wilt thou slay me swiftly?" And from the blade rang a cold voice in answer: "Yea, I will drink thy blood gladly, that so I may forget the blood of Beleg my master, and the blood of Brandir slain unjustly. I will slay thee swiftly."

Beleg is a Sindarin name. It means "large", "great" or "big",[9] which may be a reference to his stature.