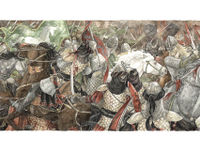 "Southward beyond the road lay the main force of the Haradrim, and there their horsemen were gathered about the standard of their chieftain. [...] Then he was filled with a red wrath and shouted aloud, and displaying his standard, black serpent upon scarlet, he came against the white horse and the green with great press of men; and the drawing of the scimitars of the Southrons was like a glitter of stars."
― The Lord of the Rings, The Return of the King, The Battle of the Pelennor Fields

The Black Serpent was the emblem displayed in the standard of a chieftain of the Haradrim, who led the cavalry of the main force of the Haradrim in the Battle of the Pelennor Fields, a "black serpent upon scarlet". In the battle King Théoden of Rohan threw down this chieftain and afterwards spurred to the standard and hewed down the staff and the bearer of the standard. After he was mortally wounded Théoden claimed to Merry before his death on the field that he was satisfied, for he had felled the Black Serpent.[1]

Suladân from The Lord of the Rings Strategy Battle Game

Dernhelm warns Théoden of the coming of the chieftain. He kills the chieftain, but is killed by the Witch-king almost immediately after.