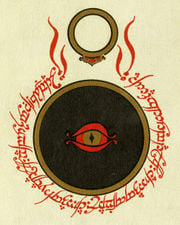 The Ring-inscription by J.R.R. Tolkien in the first covers of The Lord of the Rings

The Black Speech was created by Sauron during the Dark Years to be the sole language of all the servants of Mordor, replacing the many different varieties of Orkish and other languages used by his servants. When Sauron was overthrown at the end of the Second Age the ancient "pure" form was forgotten by all but the Nazgûl. When Sauron returned it was once again made the official language of Barad-dûr. However, a more "debased" form was used by the soldiery of Barad-dûr at the end of the Third Age.[1] The only example given of "pure" Black Speech is the inscription upon the One Ring[2]:

When translated into English, these words form the lines:

These are the first two lines from the end of a verse about the Rings of Power.

Many Orkish dialects had adopted words from it.[1] The Black Speech was at least in part based on Valarin.

The Black Speech was not intentionally modeled on any style, but was meant to be self ­consistent, very different from Elvish, yet organized and expressive, as would be expected of a device of Sauron before his complete corruption. It was evidently an agglutinative language, and the verbal system must have included pronominal suffixes expressing the object, as well as those indicating the subject. [...] I have tried to play fair linguistically, and it is meant to have a meaning and not to be a mere casual group of nasty noises, though an accurate translation would even nowadays only be printable in the higher and artistically more advanced forms of literature. According to my taste such things are best left to Orcs, ancient and modern.[3]

Tolkien linguist Helge Fauskanger has noted a theory proposed by Russian historian Alexander Nemirovski, that the Black Speech, according to the shape of words, agglutination and grammar, shares many similarities with the ancient Mesopotamian language Hurrian.[4]

Linguist David Salo used what little is known of the Black Speech to create enough of a language for use in the films.[5] This is usually referred to by Tolkienists as neo-Black Speech.

In the 2013 film, The Hobbit: The Desolation of Smaug, Gandalf showed a promissory note to Thorin. The note that promised payment for Thorin's head was written in Black Speech.