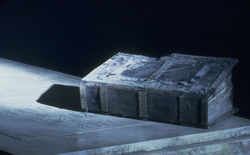 The Book of Mazarbul, as seen in The Lord of the Rings: The Fellowship of the Ring.

The Book of Mazarbul was the record of Balin's return to Moria with a group of Longbeards in Third Age T.A. 2989.

The Book of Mazarbul was begun in T.A. 2989, upon Balin's return to Moria. The book recounted a battle with the Orcs that inhabited the old halls of Khazad-dûm, in which Balin's Dwarves were victorious. They settled in the Twenty-first Hall, above the East-gate, and Balin himself ruled his new domain from the old Chamber of Records, also called the Chamber of Mazarbul. Over the next five years, the Dwarves seem to have settled quite successfully into their new home, exploring under the Mountains as far as the West-gate of Moria, and recovering Durin's Axe and apparently other priceless items made of mithril. These feats were recorded in the book.

The Lordship of Balin was short-lived. Ori, who was with him in Moria, recorded in the last pages of the Book how an army of Orcs came unexpectedly out of the east, slaying Balin outside the East-gate. The Dwarves defended themselves, but they were beleaguered from the east by the Orcs, and from the west by the mysterious Watcher in the Water. Their last stand was in the Chamber of Mazarbul, where the Orcs eventually overcame and destroyed them. As there was no hope to escape, Ori continued writing in the book, hoping that someone would find it, and would know what happened to them.[1]

The victorious Orcs seem not to have understood the significance of the Book, so that rather than carrying it off or destroying it, they left it to rot in the Chamber. There it was found twenty-four years later by the Company of the Ring, burned, slashed and blood-stained, and missing a number of pages, but still readable in some parts. Gandalf passed it to Gimli to return to King Dáin, after which nothing more is heard about it. If Gimli was able to keep it through the battles that followed, and didn't discard it with his gear at Parth Galen, it is possible that he carried it throughout his travels in Middle-earth, returning it at last to Dáin's heir Thorin III in Erebor.

The Book of Mazarbul was written by many different authors, using Cirth of Moria and Dale as well as Elvish Tengwar letters. The pages of the book were marked with numbers referring to the years after Balin's arrival in Moria. 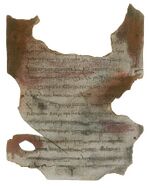 The first sample page of the Book of Mazarbul made by Tolkien.

The first page Gandalf read in the Book of Mazarbul was marked one-three, so at least two were missing from the beginning.

This page was written using Angerthas Erebor as in a diary, written quickly without attempt at calligraphy or meticulous consistency of spelling. In writing the Common Speech, the Dwarves tended to blend its usual spelling with certain idiosyncratic phonetic usages (the Dwarves did not like to use any letter or rune in more than one value, nor to express a simple sound by combinations of letters). This page was numbered at the top with the runic numeral "three".[2]

The page read the following. Many parts are not readable, and the parts in italic are those which Gandalf could not make out in the dim light of Moria.[3] 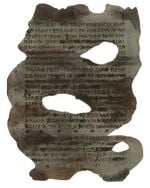 The second sample page of the Book of Mazarbul made by Tolkien.

Gandalf skimmed through the rest of the book; Gandalf notes that the pages begin to be numbered "five", meaning the fifth year of the colony. This second page was written using Tengwar of the later Westron convention which used full letters for vowels. Gandalf described the text as written by "a large bold hand using an Elvish script", which Gimli describes as Ori's hand. The runic figure at the bottom of the page is the numeral "five".

The third sample page of the Book of Mazarbul made by Tolkien.

The last page of the Book of Mazarbul was read aloud by Gandalf. It is written in Angerthas Erebor, similar to that of the first page, but with a different hand and different details in the runes.

"We cannot get out. We cannot get out. They have taken the bridge and Second Hall. Frár and Lóni and Náli fell there bravely while the rest retreated to Mazarbul. We still hold the chamber but hope is fading now. Óin’s party went five days ago but today only four returned. The pool is up to the wall at West-gate. The Watcher in the Water took Óin -- we cannot get out. The end comes soon. We hear drums, drums in the deep."

The last line is a trailing scrawl of elf-letters reads "They are coming". .

Tolkien comments on his general treatment of the Book of Mazarbul pages: "...the text was cast into English spelt as at present, but modified as it might be by writers in haste whose familiarity with the written form was imperfect, and who were also (on the first and third pages) transliterating the English into a different alphabet."; "...since documents of this kind nearly always show uses of letters or shapes that are peculiar and rarely or never found elsewhere, a few such features are also introduced...".

The use of English to represent the Common Speech in primary sources such as the pages of the Book of Mazarbul was a result of Tolkien's vision of completely translating all Westron into modern English, even in authentic documentation, although upon reflection Tolkien said that this translation was "an erroneous extension of the general linguistic treatment"[4].

Mazarbul means "records" in Khuzdul. This name was used in connection with the Chamber of Records of Khazad-dûm and the Book of Records found in that chamber.

The Book of Mazarbul makes an appearance in the fifth episode of the first series, set entirely in Moria. Gandalf (portrayed by Martin Huba) begins reading from it, but the majority of the excerpts are heard as a voiceover by the deceased elderly dwarf Ori (portrayed by František Kovár), the chronicler of Balin's expedition to Moria.

A detailed prop was made from the movie, with Cirth and Tengwar letters written perhaps by Daniel Reeve.

The outside cover of the prop reads: "Records (of the) Longbeards of Khazad-dûm"

The first page of the book read by Gandalf in the movie is written using Cirth (Angerthas Erebor) and Tengwar (full mode). A number of leaves before this page fall out when Gandalf opens the book. This apparently is the second to the last page. The translation is as follows:

The last page of the book is written using Cirth (Angerthas Erebor) and Tengwar (full-vowel mode). The translation is as follows:

Gandalf reads a portion of the Book of Mazarbul. The results of his translation of the runes are as follows, although in his dialogues he adds sentences not found on the last two pages (in italics):

What Gandalf is reading seemingly does not always correspond with the page he is viewing when doing so. He also "reads" a few lines not seen in the viewable pages. It has been suggested that Gandalf was glancing simultaneously at three pages of text, reading all the while to the Fellowship. In other words, he was composing a summary quickly from three separate pages, perhaps including one of the pages that fell out of the book when he opened it. "We have barred the gates but cannot hold them for long" is a phrase from Tolkien's second sample page of the Book of Mazarbul, so this is likely from one the pages that initially fell out of the book.

Retrieved from "http://tolkiengateway.net/wiki/Book_of_Mazarbul"
Categories: Articles to be rewritten | Books and documents within the legendarium