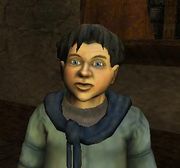 Nob, a hobbit from Bree (from The Lord of the Rings: The Fellowship of the Ring video game)

Bree-hobbits were the Hobbits native to Bree and the Bree-land around; their interaction with Men (who also lived in the land), made them more open to the outside world than their parochial cousins in the Shire.

Bree itself was a very ancient township of Men. The first Hobbits (mostly Fallohides and Harfoots) came there from the east in about T.A. 1300 fleeing Angmar.[1][2] This made Bree the only place in the world where Hobbits and Men lived together side by side. Most of the Hobbits of the Bree-land lived in Staddle, a village on the southeastern slopes of the Bree-hill, but some also dwelt in Bree itself, living in Hobbit-holes burrowed in the hill above the houses of Men.

It was where and when the Hobbits (who by that time were speaking a language probably related to that of the Éothéod[3]) adopted the Westron tongue; they also learned literacy with the Tengwar, in the fashion of the Dúnedain of Arnor.[2] The Hobbits of Bree claimed to have originated most Hobbit customs, and certainly it was thought that they were the ones who first discovered the smoking properties of pipe-weed.[4]

In T.A. 1601 two Fallohides, Marcho and Blanco, led a group of colonists westward to a province of Arnor, and asking permission from King Argeleb II they founded the Shire. The Bree-hobbits, therefore, tended to look down somewhat on their cousins in the Shire, referring to them as 'Colonists' and 'Outsiders'.[1][2]

At the end of the Third Age, the Bree-hobbits still occasionally travelled west to the Shire, but they rarely ventured further than Buckland or the Eastfarthing, those parts of the Shire that were closest to their home.

During the War of the Ring two hobbits, Bob and Nob worked at the Prancing Pony. When the Travelers entered the common room of the inn, they associated with native hobbits and travelers.[5]

The more prominent Hobbit families living in the Bree-land at the time of the War of the Ring were Banks, Brockhouse, Longholes, Mugwort, Sandheaver, Tunnelly and Underhill.

There were also hobbits by the name of Banks living in the Shire, and Underhill was a hamlet of Hobbiton, but we can do no more than speculate on the links between these families and regions.