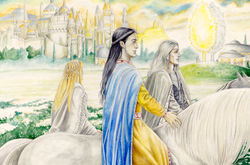 The Calaquendi included the Vanyar, Noldor, and those Teleri (the Falmari) who passed over Belegaer, as well as the Sindarin King Thingol (alone of all his people). Another name for them was the Amanyar (with the exception of Thingol, who was not counted among them), "Those of Aman". Those kindreds who settled in Aman or descended from them were also referred to as High Elves, or Tareldar[1] in the lore of the Dúnedain.[2]

The High Elves returned to Middle-earth because of the Exile of the Noldor, participated in the Wars of Beleriand and other events of the Second and Third Age.

By the later Third Age, most of the High Elves resided in or had returned to Aman; only a few remained in Middle-earth, some in Rivendell. Wandering Companies of High Elves would traverse Eriador and the Shire from time to time; Frodo Baggins recognised one of those bands as being High Elves, because of chanting the name of Elbereth.[3]

The name Calaquendi consists of Quenya cala ("light"), and quendi ("elves"); thus: "Elves of Light". The singular form of the Quenya noun is Calaquendë.

In The Hobbit, Light-elves was a name given to the Vanyar.[4] This term was used just once in this application, and never again in any canonical source.[note 1]

In Norse mythology, there are the Light Elves (Ljósálfar) and the Dark Elves (Dökkálfar or Svartálfar), a tradition which was well known to J.R.R. Tolkien.[5]