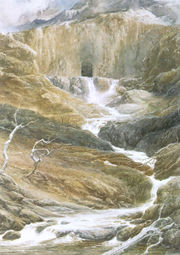 The Front Gate, showing the River Running, by Alan Lee

The River Running or Celduin was a long river that flowed from the Lonely Mountain, through the Long Lake and down through Rhovanion to the inland Sea of Rhûn.