Despite his father's recent victories, Cirion inherited a shrunken kingdom upon assuming the Stewardship in T.A. 2489;[2] Ithilien was deserted, the Corsairs of Umbar again raided the coasts while the population of Calenardhon was diminishing. All he could do was directing all his power to defend his borders.[3]

[edit] The threat from the North

One of Cirion's main concerns was the threat of invasion from the north, where the forts along the Anduin had long been abandoned. He stationed a few men there and sent scouts into the area between Mirkwood and Dagorlad. Cirion's spies discovered new enemies, the Balchoth, steadily migrating in from the East. Cirion was hard put to it to hold the line of the Anduin.[3]

After the winter of 2509, reports came to Cirion that hosts of men were mustering along the southern edge of Mirkwood with plans to invade Gondor. Desperately, Cirion dispatched several messengers to the Éothéod, who were old allies of Gondor but had removed to the far north near the sources of the Anduin.

Six volunteer riders were chosen to attempt the nine hundred and fifty mile journey through Calenardhon, over the Undeeps, and past the shadow of Dol Guldur. Only one, Borondir, got through to Framsburg when he delivered his message to King Eorl the Young.

[edit] The Battle of the Fields of Celebrant

Knowing that there was scant chance of his message arriving, and not knowing if the Éothéod would respond, Cirion gathered as great a strength as he could and prepared to lead it himself against the threat, while leaving his son Hallas in command at Minas Tirith.

However, as Cirion led his forces north, the Balchoth crossed the Anduin on rafts and overpowered the defenders. Cirion's army was cut off and driven north over the Limlight. Then came a sudden attack by a horde of Orcs descending from the Misty Mountains, which pressed Cirion towards the Anduin. Hope was failing when suddenly the horns of Eorl's riders were heard and the fortunes of the Battle of the Field of Celebrant were reversed. Eorl the Young and his riders swept away the enemy, pursuing the Balchoth across the fields of Calenardhon.[3][4]

[edit] The Founding of Rohan

Prior reaching the top, Cirion revealed his resolution, to offer to Eorl the land of Calenardhon for him and his people, in perpetual alliance with Gondor. Eorl accepted, in acknowledgment of Cirion's wisdom and friendship. The group then continued to climb and, at the summit, Cirion revealed the tomb of Elendil. Before witnesses (Cirion’s son Hallas, the Prince of Dol Amroth, and two other Councilors of Gondor), Cirion pledged his bond with Eorl. In return, Eorl swore the Oath of Eorl and became the first King of Rohan.[4]

When Rohan was founded, Cirion judged that the "Tradition of Isildur" was now made void: The hallow was no longer "at the midpoint" and Gondor was not the Kingdom as it was when Isildur spoke. Cirion removed the casket that Isildur had set within the mound and sent it to the Hallows of Minas Tirith.[5]

Cirion was succeeded by his son Hallas. 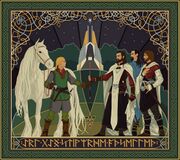 The Lord of the Rings Online tapestry: The Oath of Eorl

A statue of Eorl and Cirion is erected near the site of their first meeting. A tapestry called "The Oath of Eorl" showing Cirion is found in the Mead Hall of Aldburg.