The Dark Years were the long years of the Second Age when the races of Middle-earth, especially the Men, suffered under the domination of Sauron.

After the War of Wrath, Morgoth was defeated and judged by the Valar, but his lieutenant Sauron escaped judgement. The Edain had been offered the isle of Elenna and flourished there. While the Elves and the Dwarves retreated in their respective realms, outside them, "Middle-earth went backward and light and wisdom faded".[1] According to the Tale of Years, the dates that concern events in Middle-earth, unlike Númenor, are often uncertain.[2]

The Middle Men who did not heed the summons of the Valar and Morgoth fell back in a primitive state, having no contact with the Eldar or the Edain. Instead, some of the evil Men who escaped the destruction of Beleriand came to the east and became their Kings. For this the Middle Men were neglected by the Valar.[1]

It was thanks to the Entwives that some Mannish folk learned agriculture, and the Men honoured them.[3] The primitive Northmen of Rhovanion were defenceless against the remnants of Orcs, and were provided with metal weapons by the Longbeards who forged an Alliance with them.[4]

Around S.A. 600 the Númenóreans sent ships to Middle-earth and established contact with the Middle Men and started teaching them agriculture, stonecraft and smithying. But it was around S.A. 882 when King Gil-galad warned the Númenóreans that an evil power was taking shape in the East.[5][6] 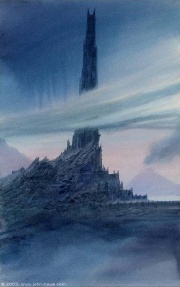 Indeed, Sauron was ever at work gathering Men of Darkness in the east and the south[7] some of whom had been of old corrupted by Morgoth.[4] He established himself to Mordor around S.A. 1000 and fortified the land with the Black Gate and armies of Men whom he corrupted and enslaved. He also built Barad-dûr near Mount Doom.

Sauron attempted to corrupt the prosperous Elves of Eregion persuading them to create the Rings of Power. When the Elves rejected him, they fought a bloody conflict against him, but Sauron destroyed Eregion and devastated much of Eriador, pushing the Elves back to the Blue Mountains, as the Dwarves retreated to Moria.

Wearing a fair and wise guise for the Men who worshipped him as "Lord of the Earth", Sauron now dominated most of the East and the South, even much of the Westlands. He gathered all evil things of his former master, multiplying the Orcs; he ruled with force and fear and it was then when he started to be known as the Dark Lord and the Enemy by those who saw his power spreading over the world. Allowing not any freedom or rivalry, he desired to destroy the Elves as well as Númenor. The Elves remembered those years as the "Days of Flight" as Sauron hunted them, and they fled to Lindon, where Sauron could not enter, and thence over the Sea to the Uttermost West.[7]

Other peoples retreated to the mountains or the woods, in fear.[7] Reinforced and commanded by his servants, the Orcs invaded the mountains of the Longbeards again. Gundabad was re-taken, the Grey Mountains infested and Moria lost contact with the Iron Hills. This also broke their Alliance with the Northmen who also during those times had war against Orcs and savage tribes of Easterlings. The war scattered them and the diminished numbers who remained there were impoverished, living in caves or in the borders of Greenwood.[4]

Some of the Men of the White Mountains feared Sauron and started worshipping him.[8] Others of their folk migrated northward to the southern dales of the Misty Mountains.[9]

But then the powerful Númenóreans responded to the Elves' plea and sent ships and armies to their support. The alliance, after heavy fighting, managed to reclaim Eriador and pushed the Dark Lord back to Mordor with a handful of orcs.[7]

The war ended, however this was not the end of the Dark Days. Sauron directed his power over the far south and east conquering and dominating the savage tribes.[10][11]

Meanwhile Númenor fell under the Shadow and the colonists started to oppress the primitive Men of the Westlands, demanding tribute of goods and wealth.[1] Some indigenous folk of Middle-earth were afraid of these Black Númenóreans and their ships who intended at some point to conquer the land of Agar and slay its people.[12]

Sauron turned his attention to the west once more, declaring himself "King of Men", starting against the Númenórean colonists and their ports. The arrogant Númenóreans, who were traditionally the "Kings of Men", saw him as their competitor, and once more came against him. King Ar-Pharazôn took Sauron as a captive to Númenor, further corrupting the Númenóreans, who continued to enslave the primitive Men and even using them as human sacrifices. This corruption eventually resulted in the Downfall of Númenor.[1]

Sauron's spirit escaped to Middle-earth, and returned to Mordor, where he slowly rebuilt his strength. Unable to assume a fair form, he started to rule through terror and force.

Dúnedain attack in Peter Jackson's Fellowship of the Ring

The Faithful who escaped founded Gondor and Arnor in Middle-earth and gathered Mannish peoples under them, including the Men of the Mountains who formerly worshipped Sauron. Sauron still considered the Númenóreans his most hated enemies and he launched a pre-emptive attack against them. The Númenóreans formed a Last Alliance with the Elves of Lindon and fought Sauron in the War of the Last Alliance, where finally Sauron perished.[7]

Sauron's defeat ended the Dark Years and the Second Age, and allowed the Númenórean realms to flourish during the Third Age.

Other names of this period were the Black Years, Days of Flight for the Elves who fled to the Sea,[7] and Dark Days[13].

At one point Aragorn mentions the Accursed Years to the Oathbreakers, which Robert Foster identifies as another name of that period.[13] On the other hand, the Encyclopedia of Arda considers it a "term of uncertain meaning", probably referring to the Third Age when the Oathbreakers were cursed to roam the White Mountains.[14]

Some of the Dark Years are seen during the Prologue to the film accompanied by Galadriel's narration. After Sauron forged the One Ring, his power is seen expanding over a map of the Westlands, with flashback scenes of battles and peoples being ravaged and enslaved by Orcs. The Last Alliance is formed by the Free peoples as a direct response to Sauron's brutalities.