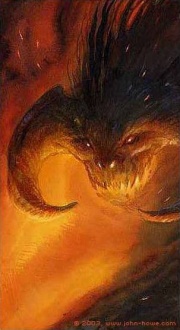 Demons were evil spirits that ranked among the most powerful of Morgoth's servants. Among the mightiest demons were the Balrogs, who were fiery Maiar seduced to Melkor's service in the beginning of the world.[1][2]

The Quenya word for "demon" is rauko, and the Sindarin cognate was raug. Both derive from the root RUK.[3]

In Gnomish, one of Tolkien's early conceptions of an Elvish languages, the word for "demon" is graug, while in Qenya is arauke.[4]

A distinction is made between "animate demons" and "place-demons". The former have a body, and entail such creatures as lesser and greater Balrogs, Helegrogs ("demons of ice") and Dindair ("silent shadow", demons of shadow). Place-demons (bandúrhoth, "people of the dark prison") are incorporeal and "cannot be physically battled", an example being Caradhras the Cruel.[7]

The Regmyl (sing. Rogmul) are fire-demon spirits, called forth by the will of a Balrog.[8]

In both games, a Graug is a giant Troll-like monster. Across both games, five different forms of Graugs are seen: Common, Fire, Frost, Poison and the even larger Great White Graug hunted by Torvin. All these are very different from the Balrog also seen in Middle-earth: Shadow of War, whose design is very similar to the Balrog from the Peter Jackson films. [9] [10]