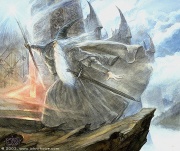 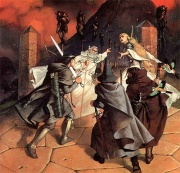 Gandalf returned to the White Council and urged an attack on Dol Guldur, but was overruled by Saruman, who secretly had begun searching for the One Ring in the area by then. In T.A. 2941 Saruman finally agreed to an attack, which occurred at the same time as the Quest of Erebor. This was carefully planned by Gandalf, so that Sauron and Smaug could not assist each other, as otherwise they could easily have done. During the attack, Sauron fled.

In 2951 Sauron came to Mordor, his plans now ready, and sent Khamûl, the second chief[9], and two other Nazgûl back to Dol Guldur.[6]

In the following decades Dol Guldur must have rebuilt some of its power until the War of the Ring, during which its forces made assaults upon the Woodland Realm and Lórien,[10] causing grievous damage to the outlying woodlands. However each time they were driven back by Thranduil and Galadriel who held the power of Nenya; which only Sauron himself could have overcome.

Dol Guldur was finally destroyed and cleansed by the Elves of Lórien, led by Galadriel, after Sauron's fall.[10]

The original name of Dol Guldur was Dol Dúgol, and on Tolkien's first map for The Lord of the Rings the hill was located much farther east than its later location (in square M-15 of Map II).[12] Christopher Tolkien explained that Map II had faint traces of green which suggested that Mirkwood originally extended farther to the east too.[13] The name Dol Dúgol was stricken out and the hill was moved to its later location on this map, but its name became Dol Dúghul before finally changing to Dol Guldur.[12]

Dol Guldur is a central point in the game's second expansion, The Lord of the Rings Online: Siege of Mirkwood. In its storyline, Celeborn and Galadriel organize a military campaign against Dol Guldur while the Fellowship still resides in Lothlórien (not to be confused with the later battle during the War of the Ring). The announced goal is to sow chaos into Orc forces by destroying as many of their troops, weapons and supplies as possible, to delay an inevitable assault upon Lothlórien. The true purpose, however, is to distract the Eye of Sauron from the company departing down the shores of Anduin. An assault by the Golden Host of the Galadhrim is successful despite minor losses and after establishing multiple camps throughout southern Mirkwood arrives at the walls of the fortress itself. However, without the White Lady they do not have the means of bringing down the walls, so the Elves prepare to swiftly fall back beyond Anduin before the main forces of the Enemy arrive. The players can also explore multiple locations within the Fortress, among them the Necromancer's Gate, the Ringwraith's Lair, the Dungeons of Dol Guldur, the chief tower named Barad Guldur and Sammath Gul - the chambers once occupied by the Dark Lord himself. Much later, after the War of the Ring, the Galadhrim and Elves of Mirkwood lead a great assault on Dol Guldur, where Galadriel casts down the walls of the stronghold, and renames the hill Dol Dhannen, "The Hill of Ruin".