"You are of the house of Eöl, Maeglin, my son, and not of the Golodhrim. All this land is the land of the Teleri, and I will not deal nor have my son deal with the slayers of our kin, the invaders and usurpers of our homes. In this you shall obey me, or I will set you in bonds."
― Quenta Silmarillion, "Of Maeglin"

Eöl, known as the Dark Elf, was a Sinda of the First Age. Akin to Thingol, he left Doriath to found his own realm in the forest of Nan Elmoth. He built up a friendship with the Dwarves of the Blue Mountains. That friendship gave him an insight into their craft, and he came to forge the swords Anguirel and Anglachel, the latter of which became Túrin's sword Gurthang.

In F.A. 316, Turgon's sister, Aredhel, strayed into his kingdom whom he took for his wife. Later, in F.A. 400, Aredhel and their son Maeglin fled Nan Elmoth for Gondolin but were pursued by Eöl. In Gondolin, he tried to kill Maeglin with a poisoned javelin, but instead killed Aredhel; for this crime he was executed by being thrown from the cliff of Caragdûr. The darkness in Eöl's heart was inherited by his son Maeglin and sowed the seeds for the Fall of Gondolin.

Eöl was of the kin of King Elu Thingol.[4][5] He was "restless and ill at ease in Doriath,"[1] and when the Girdle of Melian was raised around the kingdom, he left to dwell in the dark forest of Nan Elmoth, east of Doriath. He had a preference for the land as it had been, before the Sun, for "he loved the night and twilight under the stars."[1] He had little love for the Noldor whom he blamed for the return of Morgoth.

He was unique among the Elves of old because he befriended the Dwarves. Their travels into East Beleriand followed two roads, and the northern way would bring them close to Nan Elmoth. There he would meet with them. Eöl was interested in learning from them, and he shared a rare friendship with the Dwarves of Nogrod and Belegost in the Blue Mountains. As a guest in their mansions, he developed his great skill in metalwork while they learned "much of what passed in the lands of the Eldar" from him.[1]

Eöl was a skilled craftsman and a master sword-smith.[6] Among his greatest works were the two swords made from the iron of a meteorite, Anglachel and Anguirel. Anglachel he gave to Thingol as a begrudged payment for dwelling in Nan Elmoth,[7] and it would later become the sword borne by Beleg, and after him, Túrin Turambar. Eöl also devised the strong yet supple, jet-black metal known as galvorn, from which he forged the armour that he used when travelling abroad.

In the early fourth century of the First Age, Eöl saw Aredhel, the sister of Turgon the King of Gondolin, near the borders of Nan Elmoth. She was very fair and he desired her. Aredhel had become separated from her companions, and Eöl used his enchantments to draw her deeper into the woods and unable to find a way out, until she came, weary with wandering, to his home. He showed himself and welcomed her. She entered his home willingly and stayed. He took her to wife, and in F.A. 320, she bore him a son. The child's mother-name was "Lómion", but his father gave him the name of Maeglin.

In the summer of F.A. 400, Eöl travelled into the Blue Mountains for a midsummer feast with the Dwarves of Nogrod, and he returned home to find that his wife and son had left two days earlier. Mounting a horse, he gave chase. Along the way, he was waylaid and taken by Curufin. The son of Fëanor offered insult to Eöl and expressed his wish to slay him. However, Curufin did not commit this deed, for it was against the laws of the Eldar. Instead he counseled Eöl to return home, forseeing his venture would end in death. Eöl did not heed him, and eventually spotted his wife and son at the Ford of Brithiach. Realizing that Aredhel was returning to Gondolin with his son, Eöl followed them. He found his way to the Dry River, and the secret way led him to the gates of Gondolin itself. There he was captured and taken to the King. 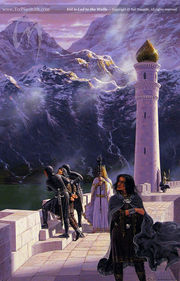 Eöl is led to the walls by Ted Nasmith

Turgon at first welcomed Eöl as a kinsman, but under the King's law, one who had found the way to the Hidden City was not permitted to leave. Eöl refused to acknowledge the law or the right of the Noldor to "seize realms or to set bounds" and claimed the land as Teleri.[1] He blamed the Noldor for bringing war to a peaceful land.

Turgon pointed out that the borders of Eöl's own "sunless woods", Nan Elmoth, were defended by Noldor swords, and if it were not for their presence, he would be a thrall in the pits of Angband. Eöl was left one choice: abide in Gondolin or die. The same choice was left for his son, who chose to stay.

Enraged at the humiliation and the loss of his freedom, Eöl chose death, for himself and his son, and cast a javelin, which he had hidden beneath his cloak, at Maeglin. Aredhel stepped in front of her son, and she was struck in the shoulder. The wound was treated and seemed minor, and Aredhel and Idril moved Turgon to mercy. But no one knew the point of the javelin had been poisoned until it was too late, and Aredhel died. Thus when Eöl came before Turgon he found no mercy, and was cast over the cliff of Caragdûr to his death. Before he was hurled over, he cursed his son to share the same fate.[1]

The meaning of the name Eöl is unknown, and also to which language it pertains. The word is neither Quenya nor Sindarin, but "Another name from prim[itive] FG - meaningless then and now" since "it isn't really absolutely necessary that names should be significant."[8]

Usually the reference of a Dark Elf (Moredhel in Sindarin)[9][10] simply refers to an Elf who has not seen the light of Aman, but the concept of a darkened Elf would be one that may have been corrupted by Morgoth.[8] Tolkien liked this concept as an explanation for his superb and insidious smith-craft, which was written in a margin note of Eöl's story,[8]:320 but he chose instead to consider him more likely acquainted with the Dwarves.[6]:Note 9

Tolkien does have other renditions of this character that include references to him as an Avar and even as a "darkened Elf".[11]:62 At one point it is hinted that he could be one of the Laegil.[8]:322 In note 9 of Tolkien's essay "Quendi and Eldar", another draft of Eöl's story appears, dated as written between 1959-1960. In this version, he is an Avar who had once been of the second clan of Elves, the Tatyar. This was later contradicted by Tolkien in a very late essay, where he is called an Elda. It is unknown if Tolkien changed this or simply forgot, but it is possible to reconcile them by noting that, according to Quendi and Eldar, any rare Avar that joins the Sindar becomes an Elda. Eöl's marriage is a little different in this story as well. He found "the sister of King Turgon, astray in the wild near his dwelling, and he took her to wife by force: a very wicked deed in the eyes of the Eldar."[6]:409

However, that incident contradicts his late 1950s writing on the Eldar included in his essay "Laws and Customs Among the Eldar" which states that another's spouse cannot be forced.[12]:Note 5 It clearly implies that acts of lust are very rare and that an Elf can reject bodily life to thwart sexual assault.[12] This conflict of what it meant when Eöl took Aredhel to wife is ameliorated in The Silmarillion with the simple explanation that Aredhel was not "wholly unwilling" nor that her life in Nan Elmoth was "hateful to her for many years."[1]

This essay on the Eldar also clarifies the idea that once Idril married Tuor, for example, Maeglin should have relinquished his desire for her because he could not physically have her regardless of Morgoth's promise. However, by this point, Maeglin was a darkened Elf.[6] It also is exemplified in another brief tale circa 1958 of Melkor attempting to marry and then ravish the Maia-maiden Arien, but she released her spirit.[13]:381 Among the Eldar, and apparently among the Ainur, marriage could not be forced as it was among some Men (see Aerin).