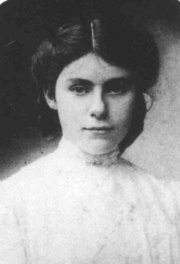 "...only the rarest good fortune brings together the man and woman who are really as it were 'destined' for one another, and capable of a very great and splendid love."
― J.R.R. Tolkien to his son Michael in Letter 43

When Tolkien was living at 37 Duchess Road, Edgbaston, Edith was a young female lodger who lived in the bedroom beneath Tolkien and his brother Hilary.

They were married on Wednesday, 22 March, 1916 in Warwickshire, England. She was the mother of his four children: John, Michael, Christopher, and Priscilla.

J.R.R. Tolkien never referred to Edith as Lúthien, but he considered her as such, so he asked that the names Beren and Lúthien were inscribed on the grave they share.[1]