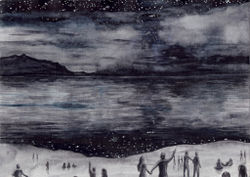 "The Firstborn at Lake Cuivienen" by Peter Xavier Price

The Edain, however, equated elen and elda ("Elf"), so in some situations elen translates as "Elf".

It is said traditionally to come from the exclamation ele! ("behold"), being the first word the first Elves spoke at Cuiviénen, when they saw the stars.[3]

[edit] With the meaning "Elf"

El means "deity" in some Semitic languages, and is a common element in many Hebrew names, as happens with Elvish names. Dante Alighieri in his De vulgari eloquentia suggests that the word El was the first sound emitted by Adam: While the first utterance of humans after birth is a cry of pain, Dante assumed that Adam could only have made an exclamation of joy, which at the same time was addressing his Creator.[10] Verlyn Flieger explains that "neither Tolkien's ele nor its derivative el, functions in his protolanguage as a name of God. Nevertheless, both are names for the first light, which suggests God's emanation. The similarity of the fictive first utterance of Tolkien's Elves to Dante's deduced first utterance should not go unremarked".[11]