Elenna or Elenna-nórë, also Andor, the "Land of Gift", was the island on which the realm of Númenor was founded.[2]

The name meant "Starwards",[3] from the fact that the first Men to inhabit that island came to it by following the light of the Star of Eärendil.

Generations later, owing to the Númenóreans' arrogance and blasphemy against the Valar, Elenna was deluged during the Changing of the World.

The island of Númenor had a surface of probably around 180,000 square miles.[4][5] It was located in Belegaer closer to Valinor (about 39 days by ship) than Middle-earth.

Its shape was that of a 5-point star. Each point had its own unique geological and physical features, and was therefore considered a separate region of Númenor with its own name:

The central region of Mittalmar contained the region of Emerië, a grassland with many sheep, and the sacred mountain Meneltarma, which stood in the very centre of the island. The mountain was the highest location on the entire island, and was a holy place devoted to Eru Ilúvatar. It was said that on a clear day the 'far-sighted' might see Tol Eressëa, the island off the coast of Eldamar, and the easternmost part of the Undying Lands.

The lower slopes of the mountain, the Tarmasundar, were gentle and grass-covered. However, near the summit the slopes became more vertical and could not be ascended easily. The kings later built a spiral road to the peak, beginning at the southern tip of the mountain and winding up to the lip of the summit in the north.

The only other known mountain on the island was Sorontil, in Forostar.

Númenor had only two rivers: Siril which began at Meneltarma and ended in a small delta near the city of Nindamos, and the Nunduinë, which formed the lake Nísinen before reaching the sea in the Bay of Eldanna near the haven Eldalondë.

The island itself was tilted southward and a little westward; the northern coasts were all steep sea cliffs.

Númenor contained many species of plants that could be found nowhere else in Middle-earth, and many of them were given to the Númenóreans by the Eldar from Aman. Most important of these was the White Tree that dwelt in the King's Palace at Armenelos. A seedling from it was later planted in the Court of the Fountain in Minas Tirith in Gondor.

The other parts of Númenor contained many types of plants, many unique to each of the promontories of the island. Andustar contained great forests of beech and birch on the higher ground, and oak and elm forests at lower altitudes. The eastern part of Hyarnustar, being warm and fertile, had great vineyards.

The greatest delight of the Númenóreans, however, were the trees given to them by the Eldar. They grew mostly in the Western portion, Andustar. They are often remembered in song and lore, and few have flowered east of Númenor.

Because of the diversity of wildlife in Andustar, that region was soon called Nísimaldar, or the Fragrant Trees. Also only in Andustar could the Golden Tree be found, Malinornë.

In Hyarrostar grew the tree Laurinquë, which the Númenóreans loved because of their flowers. They incorrectly believed that it came from the Great Tree of Valinor, Laurelin.

The word Elenna is actually the allative form of the Quenya word elen meaning "to (a) star". The "longer" name Elenna-nórë is glossed as "Land of the Star",[6] literally "Starwards-land". The island was so named because the Edain colonists sailed "starwards", following the Star of Eärendil to reach it.

Robert Foster mistakenly identifies the word as being the "essive" form of elen.[7] Essive is a grammatical case that exists in Finnish (but not in Quenya), and is marked by the ending -na, like the Quenya allative. 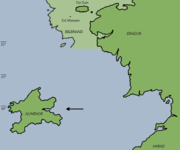 Tolkien never drew a map of Arda showing where exactly in Belegaer, or relative to Middle-earth, the island of Númenor stood, but there are some narrative hints.

While sailing for Lindon, Vëantur had to fight the north and east winds,[8] possibly suggesting the island was south of the latitude of Lindon (or perhaps simply stating the presence of opposing winds). It is also mentioned that Vëantur was accompanied by (apparently migratory) birds in autumn and spring.[9]

The Downfall of Númenor, while causing loss in Lindon, also filled much of the Bay of Belfalas so that the city of Pelargir was left far inland.[10] This could suggest the island was more or less around the latitude of the Bay of Belfalas. However, the cataclysmic forces of the Downfall were stated to have impacted "all the coasts and seaward regions of the western world". This could be construed as evidence for Númenor being located in a relatively central position on the north-south axis. However, in the "World Made Round" conception of the Downfall presented in the Akallabêth, the cataclysm is by no means localized to Númenor, as the entire earth is warped and "new lands" are created.[11]

As vineyards are attested in the eastern part of the Hyarnustar, Didier Willis notes that adequate climatological conditions for viticulture are quite strict[12] and estimates the island to be located around 40° N, indeed facing the Bay of Belfalas.[13]

It is mentioned, however, that after his first voyages to Middle-earth, Aldarion was no longer content to sail to Mithlond and began exploring the coasts southwards, past the mouths of Baranduin.[14] This suggests that the first land to be encountered on the journey of the Númenóreans east is north of the Brandywine delta - Lindon, which could place the island around that latitude.

As for the distances, we are told simply that the island was closer to Valinor than Endor.[15] It was said that from Meneltarma, the keen-eyed Númenóreans could sometimes get a glimpse of Avallónë;[15] the Fall of Númenor came 39 days after Ar-Pharazôn left,[15] but his actual voyage could be shorter.

Didier Willis estimates that as Vëantur could sail directly from Númenor to Lindon - not needing to find a closer coast and follow it up to his destination - the island was close enough to Lindon, with a realistic distance between 2000 to 3000 km.[9]

Karen Wynn Fonstad placed the island in her Second Age maps south of the latitude of the Umbar. It approximates the Númenórean ports of Vinyalondë, Pelargir and Umbar on Middle-earth. Her map shows the distance between the Island and Eressëa to be approximately 800 miles.[16] Because Eressëa was within eyesight of Túna,[17] Túna was located "nigh to the Girdle of Arda" (ie, near the equator),[18] and the far-sighted could on a clear day see Eressëa from the summit of Meneltarma,[3] Númenor could not be too much further north than the equator itself.