Elwing the White was the third child and only daughter of Dior Eluchíl and Nimloth of Doriath, and later on the wife of the well-known Eärendil the Mariner. Elwing had twin-brothers who were elder to her and they were Eluréd and Elurín. It is said that she could speak with birds.

She was named Elwing, "which is Star-spray, for she was born on a night of stars, whose light glittered in the spray of the waterfall of Lanthir Lamath beside her father's house."[1]

When Elwing was very young, her father Dior inherited the throne of Doriath, along with the Silmaril reclaimed by her renowned grandfather Beren, a Man of the Edain. Then she and her twin-brothers, Eluréd and Elurín, moved with their parents, Dior and Nimloth, to the caves of Menegroth in Doriath. In F.A. 506, the sons of Fëanor, driven by their terrible Oath, attacked Menegroth and slew her parents (the King and Queen of Doriath) and took her elder brothers in captivity to starve in the wild. She escaped the Second Kinslaying with the Silmaril and fled to the Havens of Sirion.[1] There she met and married Eärendil and gave birth to twins Elrond and Elros.

The Seagull by Elena Kukanova

In F.A. 538 the remaining sons of Fëanor attacked the Havens of Sirion to reclaim the Silmaril in her possession. They captured Elwing's sons but as they came for her she cast herself into the Great Sea. Through the power of the Vala Ulmo, she took the form of a white bird and came to her husband in his ship Vingilótë with the Silmaril upon her breast.[2]

Elwing sailed with her husband on his great voyage to the West and, unlike the crew of his ship, refused to be separated from him when he sought the Valar in Valinor. While he spoke to them, she went to Alqualondë and told the Falmari (who, as Teleri, were of Thingol's kin) there about the tumultuous history of Beleriand, and later persuaded them to sail their ships for the Host of Valinor. When the Valar allowed Eärendil and Elwing, both being Half-elven, to choose which of the races they would be members of, Eärendil let her make the choice for them. Because of what had happened to her grandmother Lúthien, Elwing decided to be counted among the Elves, as did her husband for her sake. 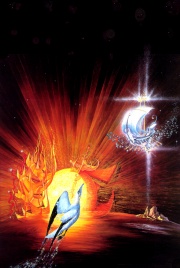 Earendil and Elwing by Roger Garland

Elwing was given a white tower northward upon the borders of the Sundering Seas, and there she helped seabirds that came to her windows. Eventually she learned their language, and was able to fly with white wings, and she still flies to meet Eärendil whenever he returns from his voyages through the sky. "Then the far-sighted among the Elves that dwelt in the Lonely Isle would see her like a white bird, shining, rose-stained in the sunset, as she soared in joy to greet the coming of Vingilot to haven."[2]