When Eorl was only 16 years old, his father was killed while trying to tame the horse Felaróf, making Eorl Lord of the Éothéod at that young age. Young Eorl swore to avenge his father and managed to tame the horse. He "doomed" the horse to carry him for the rest of their lives, and the horse seemingly accepted this burden.[1]

In T.A. 2510, Borondir Udalraph came to the north seeking aid, as the South-kingdom was attacked by the Orcs and the Balchoth. On April 15th, Eorl came to the Field of Celebrant, and joined the battle. For his service to Gondor, he was granted Calenardhon to dwell in. As a return, Eorl and his descendants would have to come to the aid of Gondor when they requested; this was known as the Oath of Eorl.[2]

Eorl ruled from a green hill under the White Mountains.[1]

Even in his older years Eorl never lost his yellow hair. He died in battle against the Easterlings in T.A. 2545. He was buried in the first royal mound, and Felaróf was buried with him.[3]

Eorl was the founder of Rohan, its first King, the ancestor of the House of Eorl and all the Kings of Rohan. His horse Felaróf was the first of the Mearas.

Eorl was known as "the Young" because he became Lord of the Éothéod at the age of 16 and because he never lost his yellow hair.

His Oath would be answered at least twice: once by Folcred and Fastred, and once by Théoden Ednew.[3]

Eorl is an Old English word that can be roughly translated as "one of the nobility, earl". It was the highest of the ranks in North Germanic culture, not introduced to Britain until the late 9th century. The title was known as jarl in Old Norse,[4] and because of that, the Þórsteinn Thorarensen used this throughout his Icelandic translation of The Lord of the Rings, along with Hjálmur, Þengill, Þjódan and Jómar.[5] 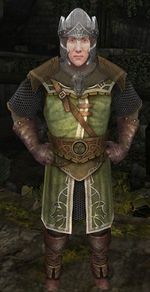 Eorl in The Lord of the Rings Online

Eorl appears in a series of flashbacks narrating the history of the Eotheod. Additionally, he is depicted on tapestries found throughout Rohan. A statue of Eorl and Cirion is erected near the site of their first meeting.