Fall of the Noldor

Fall of the Noldor 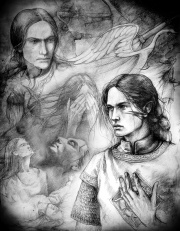 The Fall of the Noldor or the Fall of the Elves refers to the result of the crimes of this Elven people, that mirrors the first Fall of Men.[1]

As Fëanor led the Noldor to Exile, he went to the haven of Alqualondë to acquire the ships of the Teleri. When their lord Olwë refused, Fëanor led an assault that became known as the Kinslaying, in which the blood of many of the Noldor and the Teleri was spilled, before making off with the ships he needed to return to Middle-earth.

Because of this event, the Valar condemned the "fallen" Noldor; an emissary (perhaps Mandos himself) appeared to them in Araman and pronounced the Doom of the Noldor and cursed those who did not repent.

Maglor was the second son of Fëanor, and was present at the Kinslaying, though history does not record what part he played in the battle. He was also famed as the greatest minstrel and singer of all the Noldor, and he later made a song that lamented the losses at Alqualondë. Its name was Noldolantë, a name that translates as "The Fall of the Noldor".