The Falmari were the Teleri who followed the Great Journey into Beleriand and reached Valinor.[1][2]

The Teleri were the most numerous Elven clan and also the most slow and reluctant of the Great Journey; many turned back or stayed behind. Their leaders were the brothers Elwë and Olwë, but when Elwë became lost in Beleriand, many of his people refused to carry on to Aman until he had been found; it was Olwë who led the rest to the shores of Beleriand.[1]

As they waited for Ulmo's floating island, they lingered at the Bay of Balar where they were befriended and taught by Ulmo's vassal, Ossë. When Ulmo returned to take the bulk of the Teleri with Olwë to the West, Ossë convinced some of them to forsake Valinor and stay behind with him. These afterwards became the Falathrim.[1]

As Ulmo ferried the floating island to the West, the Teleri again heard Ossë's song and begged Ulmo to stop off the shore, which he did. Ossë fastened the island to the bottom, and it became Tol Eressëa, the lonely isle off the Bay of Eldamar. These Teleri became known as Falmari and their language eventually diverged from that of the Vanyar and the Noldor.[1]

However soon the Falmari of the island longed for the splendour and Light of Valinor and wished to see their kindred there, the Vanyar and the Noldor. Grieving, Ossë submitted to the will of the Valar and Ulmo, and taught them ship-building and offered them swans to draw them to Valinor. There they built the city haven of Alqualondë with Olwë their king.[1] 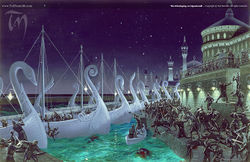 "The Kinslaying at Alqualondë" by Ted Nasmith

The Teleri were mostly close to the Noldor. However during the Flight of the Noldor, the Telerin mariners refused to join the host of Feanor in leaving Valinor. They attempted to protect their swan-ships from the Noldor, however they were armed only with bows. Many of them were cruelly slain in the Kinslaying at Alqualondë.[3]

In the later years of the First Age, Alqualonde was visited by Eärendil and Elwing who had reached Valinor. Elwing stayed a little there and told stories to the Teleri about the griefs of Beleriand and they were filled with pity and wonder. Because of their bitterness against the Noldor few or none of the Teleri joined the Host of the Valar which set out to capture Morgoth for good.[4]

After the War of Wrath, the Elves of Middle-earth were admitted to the Lonely Isle and Valinor. The Teleri eventually forgave the Ñoldor for the Kinslaying, the Curse of Mandos was lifted and the two kindreds were at peace again.[4]

Having been taught by Ossë, the Teleri were masters of music, the sea and shipbuilding, and they used Swan-ships. When the Falmari reached Eldamar, they were close to the Noldor, who offered them many jewels and crystals, which they used to adorn their pools and beaches; the Falmari prized the pearls which they found from the sea and used for their halls.[1] The Teleri also prized silver (which they called telpe) above gold.[5]

Although they spoke a different language, the closeness of the two peoples resulted in a sprachbund, and the speech of the Noldor had some influence from Telerin.[6]

The name "Falmari" (which is preferred in this article) is found only once[1] in the published Silmarillion, where the Teleri of Aman are mostly known as 'the Teleri' (obviously representing the Noldorin point of view); however the Teleri of Aman were properly just the branch of the Telerin clan.[2]

In one text, the names Falmari (Quenya) and Falathrim (Sindarin) both refer to the people of Círdan in Beleriand[7] however elsewhere, as well as in the published Silmarillion, the Quenya name refers to those in Valinor,[9][2] and the Sindarin name to those of the Falas.[2]

In the early versions of Tolkien's mythology (see: The Book of Lost Tales), they were known as Solosimpi ("Pipers of the Shores"), while the name Teleri was given to the clan of Elves known in the published version of The Silmarillion as Vanyar.