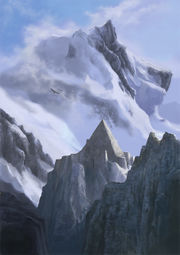 Fingolfin's Cairn was the resting place for the body of King Fingolfin, the High King of the Noldor, after his single-handed combat with Morgoth. It was built upon a mountain top in the Echoriath, to the north of the valley of Tumladen, overlooking the city of Gondolin.

As the forces of Morgoth achieved victory in the Dagor Bragollach, King Fingolfin believed that he was witnessing the end of the Noldor. He rode to the gates of Angband and challenged the Enemy to battle. Morgoth came forth, they fought, and Fingolfin died after wounding his opponent. Morgoth broke the King's body, and was about to cast it to his wolves when the eagle Thorondor swooped in and snatched the body away.

The great eagle laid Fingolfin's body upon a mountain above Gondolin. Fingolfin's son, Turgon, then came and piled a high cairn over the body. It is said that no Orc dared to come near the tomb.[1]

On a list of names from the 1930s, the cairn is called Sarnas Fingolfin in Noldorin.[2]